An officer of the 21st Airborne Unit of the Orb Union's ground forces. Kisaka was born in the town of Tassil in northern Africa, though his family no longer lives there.[1][2] When Cagalli traveled to North Africa to fight alongside the Desert Dawn resistance group, Kisaka accompanied her as a bodyguard though the Desert Dawn's leader, Sahib Ashman, was also aware of Cagalli's true identity. Ledonir joined the Desert Dawn in helping the Archangel after it accidentally landed in ZAFT territory and was surrounded by the forces of the "Desert Tiger", Andrew Waltfeld. It was later revealed that Cagalli was acquainted with the GAT-X105 Strike Gundam's pilot, Kira Yamato.

In retaliation for Desert Dawn's attack, Waltfeld attacked the nearby town of Tassil, destroying all supplies and resources, but sparing its population from any harm. Although Mu La Flaga and Sahib were aware Waltfeld intentionally left the civilians unharmed as an act of grace, the enraged members of the Desert Dawn launched a foolhardy attack against Waltfeld's superior TMF/A-802 BuCUEs. Ledonir rode in the same jeep as Cagalli and Ahmed el Hosn as they fired rockets that only succeed in disrupting the BuCUEs' cameras as the BuCUEs attacked and kill several resistance fighters. One of the BuCUEs noticed Cagalli's jeep, and when Ledonir realized this he grabbed Cagalli before jumping off. Ahmed was mortally wounded by the attack, and only the timely arrival of Kira in the Strike were the ZAFT mobile suits forced back.[3]

On a mission to gather supplies, the group headed to a nearby city, which also hosted Waltfeld's HQ. Sahib, Natarle Badgiruel and Ledonir then split from Cagalli and Kira to negotiate a purchase of military supplies and water. After successfully securing a deal, Ledonir was unable to find the Cagalli and Kira and reported it to the Archangel. He also told them about reports of Blue Cosmos terrorist attack in the city.[4] Following Cagalli and Kira's return, the resistance accompanied the Archangel in engaging Waltfeld's ship, the Lesseps. Ledonir was at Cagalli's side as she was determined to avenge Ahmed's death. Although the pair were nearly crushed, the battle ends in their favor as Kira successfully destroys Waltfeld's TMF/A-803 LaGOWE, while the Lesseps was severely damaged by the Archangel.[5]

Once the two groups reached the Indian Ocean, Ledonir and Cagalli opted to join the Archangel, while the Desert Dawn returned to Africa to continue their resistance. Ledonir advised captain Murrue Ramius to avoid fighting as although the Alliance's higher-ups ordered the ship to head for Alaska, they offered no support in terms of supplies or planning.[6] However, it becomes apparent that the optimistic idea of evading battle would not work as the Archangel fended off attacks from Marco Morassim's forces and then an assault by a mobile suit team led by Athrun Zala.[6][7][1] As the latter battle occurred close to Orb waters, both Cagalli and Ledonir urged Captain Ramius to enter Orb territory in spite of its coast guard's warnings. Due to the damage that the ship sustained, Ramius has little choice and complied. Upon docking at a secret port, Ledonir revealed his true identity and that of Cagalli's.[1]

Ledonir later reported the combat record of the Strike and the skill of its pilot to Erica Simmons as she needed more data to complete the MBF-M1 M1 Astray.[8] When the Archangel was ready to depart, Ledonir made a parting visit where he reviewed the Archangel's route to Alaska and confirmed that they did not sight any ZAFT ships nearby. He does inform the crew, however, that it would only be hopeful thinking that the ZAFT forces were gone as it took extensive negotiations to convince them to leave. When Lieutenant Badgiruel inquired about the truth behind the mobile suits made in Heliopolis, Kisaka replied that several cabinet members had acted independently and yielded to pressure from the Atlantic Federation. Kisaka also pointed out that the last thing Uzumi wanted was his people to suffer, thus his reluctance in getting Orb involved in the war. Both parties then exchanged thanks and Kisaka left the ship.[2]

Not long after, the coast guard reported a battle between ZAFT forces and the Archangel at a nearby island. Kisaka accompanied Cagalli to an island where the investigation team found the wreckage of the Strike and the GAT-X303 Aegis Gundam. While Kira was nowhere to be found, the team found an unconscious Athrun Zala, the Aegis's pilot, washed ashore. Ledonir then helped with the salvage work as Cagalli interrogated Athrun. Following the Battle of JOSH-A, the Archangel and its crew decided to break away from the Alliance and headed to Orb for sanctuary as well as to report the growing radicalism of the Atlantic Federation.[9][10]

Later, the Alliance lost its Panama Mass Driver to ZAFT, causing its leaders to deliver an ultimatum to Orb: Join the Alliance or be treated as ZAFT sympathizers and enemies. Knowing these terms to be intentionally unacceptable, Uzumi rallies his military and evacuates civilians. Kisaka then aid Cagalli in overseeing the battle of Onogoro.[11] Despite Orb's technological superiority, the Alliance's greater numbers and relentless attacks proved too much for the defenders, and Uzumi, knowing the country was doomed, handed Cagalli to Kisaka and ordered them to board the Kusanagi and flee to space.[12]

In space, Kisaka acted as the Kusanagi's captain and had the ship provide support to the allied Archangel and later, the FFMH-Y101 Eternal in several battles. During the Battle of Mendel, the Kusanagi and Eternal successfully sunk Rau Le Creuset's flagship, the Vesalius, creating an opportunity for the three allied ships to escape.[13] Kisaka also commanded the ship in the final battle at Jachin Due as Cagalli had left to join the fighting. After the war, Kisaka returned to Orb's ground forces.

During the Second Alliance-PLANT War, Kisaka was seen in an Earth Alliance uniform working under disguise. By coincidence, he spotted the battle between ZAFT's ZGMF-X42S Destiny Gundam and ZGMF-X666S Legend Gundam against a lone ZGMF-2000 GOUF Ignited. Noticing the GOUF was shot down, Kisaka quickly reached the crash site and rescued Athrun Zala and Meyrin Hawke before handing them to the Archangel for medical treatment. He later piloted Waltfeld's custom MVF-M11C Murasame during ZAFT's Operation Fury, and remained behind in Orb with Cagalli after the Archangel headed to space. 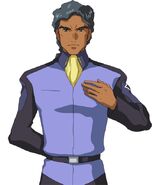 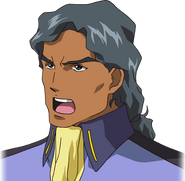 As a member of the Desert Dawn 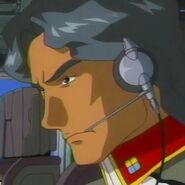