The Le Creuset Team is an elite team from ZAFT. Their main goal was to destroy the Archangel and to capture the GAT-X105 Strike Gundam.

Although ZAFT's informant had assured that ORB was developing mobile suits for the Earth Alliance, ZAFT would not give the go-ahead for the mission until it had been confirmed or proven true. Commander Le Creuset decided on his own, after receiving a photo of the Strike, that his team would go without permission from the Homeland because he "has a sixth sense about these things".

The pilots of the Le Creuset Team were all divided on their opinions to enter the colony, and it's clear they all weren't convinced Earth Alliance weapons were really being held on the neutral ORB colony, until after the photographic evidence is shown to them. Yzak calls it a "fool's errand" prior to the raid (Gundam SEED Re:); Dearka agrees, following up with saying "it's going to be their first actual battle experience". Nicol, who is rather bold in his retort, says "Dearka! Yzak! What are you two saying? This isn't a fool's errand: we wouldn't be doing this if it was a waste of time," and turns to Athrun, prompting him in agreement. However, it can be assumed by his reactions in two manga representations of this event Athrun is slightly distracted by something troubling. In the SEED manga by Random House, Yzak calls Athrun "nervous", so it's unclear his exact feelings towards a raid on Heliopolis, but it can be deducted his feelings are not of enthusiasm. Rusty, in the SEED OVA, thinks it's a bit strange to be doing a raid on a neutral colony, but Yzak retorts, pointing out by stating "if it were a neutral colony, they wouldn't be manufacturing weapons for the Earth forces". It's possible that Rusty has no grievances over following whatever orders are given to him, due to his laid-back nature. After Yzak retorts, he lightens the tension by laughing and sarcastically ranting "well... for ZAFT', as they say".

On the neutral space colony of Heliopolis, Morgenroete, ORB's military manufacturing company, secretly develops five mobile suits for the Earth Alliance to better equalize the battle strength with ZAFT's. ZAFT's reaction to this possible threat is to send Rau Le Creuset's elite team to carry out the mission. The team's goal was to simply capture the mobile suits and retreat as soon as possible to reduce the possibility of damage to the colony or the 5 mobile suits. Unfortunately for the Le Creuset Team and ZAFT, only 4 machines were successfully stolen because ZAFT pilot Rusty Mackenzie was killed, hence they were short of one pilot. Even worse for ZAFT still, Heliopolis was subsequently destroyed due to the severe damage from the combat done within it.

Kira (as a civilian) in the GAT-X105 Strike Gundam Gundam while protecting the Archangel, fought and killed Miguel, Matthew, and Olor, and leaving his battle with Athrun in the stolen GAT-X303 Aegis due to the colony's collapse.

Since he had piloted a top-secret weapon, Kira and his friends are forced to embark on the Earth Alliance warship Archangel and later choose to enlist in their military. Kira engages Athrun in battle several times. Athrun is in turmoil over having to fight his friend and attempts to convince Kira to join ZAFT, since Kira is a Coordinator, and explains to Kira why he joined ZAFT. His words affect Kira, but still, his friend refuses to cross over (along with the Strike Gundam) to ZAFT. 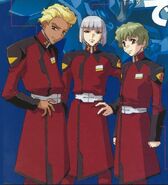 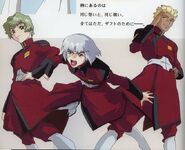 Retrieved from "https://gundam.fandom.com/wiki/Le_Creuset_Team?oldid=461051"
Community content is available under CC-BY-SA unless otherwise noted.