A young girl who resided at a space colony in Side 3's Zebra Zone with fellow Neo Zeon Remnants. At some point in U.C. 117 the colony's inhabitants along with Layla's parents are brutally slaughtered in a raid lead by Earth Federation Forces officer Lt. Baz Galemson, leaving Layla, aged twelve at the time, one of the only handful of survivors of the incident. Over six years later, the Anaheim Electronics test ship Bladewood arrives nearby to conduct tests but are attacked.

Eventually they head to the colony and assume it's abandoned and as Tokio Randall is riding through the colony they're attacked. Layla, piloting an old Geara Doga, attacks members of the test team, however, she is subsequently defeated by Kevin Forrest and surrenders. Layla is than brought aboard the Bladewood, where she reveals the truth behind the Federation's activities in the Zebra Zone which touches Iris Orlando enough that she moves to comfort a confused Layla.

The crew decides to try and verify the truth of Layla's words and they promise her that they will uphold their duty to allow the remnants of Neo Zeon the right to live. Layla is than given a ride inside Kevin Forrest's Hardygun back into the colony. When asked Layla reveals that she has been training since she was twelve though she still can't believe that she lost to someone as green as Kevin Forrest.

Kevin Forrest replies that Layla was severely handicapped due to the spec differences between their mobile suits which decided the battle. As they banter some more they fly past the destroyed Geara Doga which makes Layla sad since it may very well be the only thing she has left to remember her family by. Kevin Forrest tries to cheer her up by telling her that it's an old mobile suit so it wouldn't take long to repair it.

Eventually they are forced to ditch their mobile suits by Layla's request and they move on foot. Kevin Forrest complains about the heavy rain which Layla tells him that it happens often, when he jokes that they might get attacked again Layla tells him that her people are very self-disciplined. The only reason they aren't in mobile suits here is because piloting an unknown mobile would only incite trouble in the colony.

As they approach a building Tokio Randall puts his hand on his gun but Layla tells him to put it away and she tells them to wait as she goes to greet her people. When she vanishes behind a door the test team worries that she ditched them and as they try and figure out what to do Layla returns and tells them that they may now come in much to their surprise. They follow her underground and she leads them to their community head who understands the situation thanks to Layla's explanation.

The community leader reveals that they've been living here not because they hate the Federation but because they choose too. However those like Layla want to see things beyond just the colony and the community head requests that the test team takes those like Layla away from here since it's what they want though the elders refuse to leave. Tokio Randall and Kevin Forrest are ordered to report back and as they are about to leave Tokio Randall notices that Layla seems to be sad.

Layla reveals that she isn't sure that the elders can be convinced to leave the colony since all her attempts have not born any fruit either in the past. Tokio Randall believes that there's still a chance but even if there isn't he offers his hand to Layla and tells her that they'll at least take her away from this place which cheers her up. This is the point where Layla begins to fall in love with Tokio Randall.

Layla ends up in Kevin Forrest's Hardygun again as they head back into the Bladewood. As this is going on Layla notices that they're unknown mobile suits and nearly falls over from Kevin Forrest turning the Hardygun very rapidly since she has nowhere to sit down. Tokio Randall identifies them as Federation mobile suits and says that they're friendlies which calms Layla down. However the Federation soon reveals that they're here to kill off the test team for being witnesses to something they shouldn't have seen. Tokio Randall immediately decides to head towards the Ajax while Kevin Forrest takes Layla back to the Bladewood.

As the Ajax begins their attack Tokio Randall ends up stealing the Neo Gundam Unit 02. At around this time Kevin Forrest appears with Layla still inside his Hardygun. Layla quickly exits the Hardygun and takes the now pilot-less Silhouette Gundam despite the confusion this causes the others. Just as she straps herself in she notices the man that killed her family which instantly causes her to go berserk and she attacks him immediately. Tokio Randall tells Kevin Forrest to help him stop Layla from completely losing her mind as she yells at them to let her go so that she can avenge her family by killing Baz Galemson.

Tokio Randall tells Layla to calm down and that they need to get off the Ajax first. Iris Orlando asks what has gotten into Layla with Tokio Randall revealing that the reason she's going berserk is because of Baz Galemson. As they exit the Ajax Kevin Forrest tries to protect Layla as Tokio Randall acts as a rear guard for them, however Layla breaks off to return to the battle while mentioning Baz Galemson. As Kevin Forrest freaks out Layla tells him not to worry since she's in control now and knows what she must do.

Layla immediately comes to Tokio Randall's aid and he's surprised that despite this being her first time in the Silhouette Gundam she's piloting amazingly well. However her inexperience shows and she's defeated by the Neo Gundam Unit 01 very quickly. Tokio Randall orders her to retreat since she's outmatched and though she refuses she has no choice but to retreat. Layla than notices that there's a hole in the colony and that it's pretty much uninhabitable now which brings her to tears. Iris Orlando tells her that she doesn't need to cry but Tokio Randall corrects her and says that Layla is allowed to cry because this was her entire world up to this point and now it's lost. Tokio Randall than turns his attention on the Ajax which is attacking the colony.

After Tokio Randall destroys the Ajax he's engaged by Baz Galemson, as they're about to clash Layla appears and aids Tokio Randall who warns her that she's too close just as she's attacked by Baz Galemson. Tokio Randall, due to the advice of Iris Orlando, grabs onto the Neo Gundam Unit 01 and Iris Orlando than releases the core fighter which gives Layla the opening she needs to deal severe damage to the Neo Gundam Unit 01. Tokio Randall, in the Core Fighter, goes on to deal the final blow which kills Baz Galemson and destroys both Neo Gundams. This finally brings Layla some peace of mind and ends her quest to avenge her parents.

In the aftermath they're all cleared of any wrongdoing since no one was left to testify against them and all evidence had been lost. Tokio Randall, Kevin Forrest, and Iris Orlando all leave the Mobile Suit Development Department with Tokio Randall also leaving the military as well. Layla, now free from her past, joins them and happily greets Tokio Randall, after his resignation, when he goes to meet up with them. Iris Orlando goes on to reveal that she has a certain disk which confuses Layla as she watches Tokio Randall pat Kevin Forrest on the back as he expresses his excitement as the curtains close... 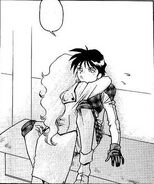 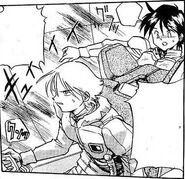 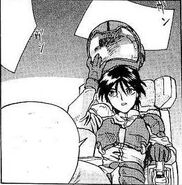