The Launch (ランチ) is a spacecraft that appears in the anime Mobile Suit Gundam SEED.

An internal fireboat installed on board space vessels such as the Nazca and Laurasia classes. They are mainly used for communication and personnel transfer between ships (they are also used as escape boats for large-scale facilities such as space fortresses). It has a docking latch on the nose that functions as an airlock, and boarding hatches on the port side.

It was used in the transfer of Lacus Clyne, who was being held hostage by the Archangel, from the Vesalius to the Gamow of the Le Creuset Team to deliver her back to the PLANT homeland.[1] During the Second Battle of Jachin Due, several were used as escape boats to evacuate from Jachin Due before it self-destructed.[2] 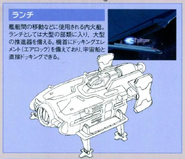