Lath Winslet (ラス・ウィンスレット, Lath Winslet?) is the protagonist of the Mobile Suit Gundam SEED ASTRAY Princess of the Sky manga. She is one of two candidates chosen as Rondo Mina Sahaku's successor.

Originally from the Kingdom of Scandinavia, Lath Winslet immigrated to the Orb Union along with her father as a representative of the Winslet World Concern. She is a first-generation Coordinator. She met the Rondo siblings after her arrival. Her father and pet dog were killed during the Earth Alliance attack in C.E. 71. The company was subsequently acquired by the Earth Alliance on grounds of Lath being a Coordinator. She was soon imprisoned at an Alliance facility and subjected to harsh treatment.

A few years later Lath is rescued from prison by Mina Sahaku and selected as a candidate to become her successor along with Kazahana Aja. Struggling with the initial confusion, she becomes determined to be chosen as successor and regain her father's company. 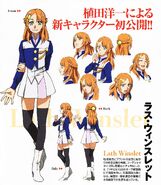