Lars Grise (ラーズ・グリース, Rāzu Gurīsu?) is an Innovade and one of the protagonists featured in the manga, Mobile Suit Gundam 00I.

Lars Grise has a personal grudge with the Innovators for ruining the life and family he had. He refuses to stop until he kills every single Innovade. In chapter 2 of Gundam 00I, Lars is shown shooting an Innovade child showing Lars has no qualms about killing even Innovade children.

Lars Grise, is an Innovade whose left eye is artificial. Lars has the abilities to remote-control a mobile suit from a long distance. Lars Grise is like all Innovades, able to utilize quantum brainwaves to telepathically communicate with other Innovades, and utilize quantum networked devices. But since Lars left eye was replaced with and artificial one, his link to Veda is disrupted.

124 years ago on Earth, Lars and his wife Pitty were viewing the news about the probe that left for Jupiter in a room. It is said that Lars' friend, Sky Eclipse, is also in the Jupiter probe ship. Lars views the program with a complicated expression. His wife (who resembles Anew due to being the same gene type) tightly embraces him. "I promise. Our child, and I, will always be beside you. You are not alone." At the adjoining room, their son who sleeps looks at the two. When it was time to "Return", Lars' wife's and child's memories were erased. Lars, who did not have his memory erased by Veda, was searching for his "wife and child" who had had their memories erased. But, when he was reunited with Pitty, she was aware that she was not human. Pitty tries to brainwash him, but the quantum brainwaves caused Lars to be aggressive till the point he shoved Pitty. Then one of the Innovades threw a knife at Lars' left eye. He then removes the knife and runs towards Pitty. The result is Lars killing Pitty, who had been his "wife" with his bare hands. The last scene is of him cradling his dead wife's body with a knife thrust into her chest. The scene changes to Lars shouting in the rain.

From year AD 2185 up to the present time, he has been living with the human society for roughly 130 years. But his information upload to Veda has been cut off for several years, and as it is, his link has also been suspended. However, Veda continues to follow Lars via external surveillance. The behavior he took is that of an "Innovade Hunter". He continues to kill Innovades for more than 100 years, and up to now has killed several hundreds of Innovades. Because of Veda's intervention, he has never been caught as a mass murderer. Because among the victims there are many that have the same outward appearance, Veda deals with the data and falsifies it.

Lars Grise kills an Innovade named Flinch, and then hunts down the next target which a small Innovade child named Bryn Sondheim. Lars him shoots him in the head, but he was saved by Leif Recitativo and Telicyra Herfi. When Bryn went missing Leif and Telicyra went to save him from Dr. Clay. He turned his gun to them, in an instant, moving as a battle type Innovade, Leif restrained Dr. Clay. Following Telicyra’s foot steps, they leave the place without killing Doctor Clay. But after a while, Lars blasted the place of Doctor Clay, Lars exclaimed “Oh God, bring death to these fake humans. And then their spirits will be at peace!”. His right eye and gun was connected by a thin cord.

In the middle of the forest, Lars is starts a campfire In the past, Lars had slaughtered the combat Innovades that has DNA template from that of Devine Nova and Bring Stabity who had appeared before the tomb of his wife, who they had killed with their own hands, with a knife. And so, Lars targeted those he knew were Innovades by their faces, without differentiating between Innovades like Leif. But, Lars was identified by Leif as one of the six comrades. For that reason, he set his sights on the Dr. Telicyra who hadn’t been a target (because of his physical appearance). Lars tracks down Telicyra at a Katharon base were he is recruiting Sulu Suluzu and Hermiya. Lars attacks them while they’re resting after dealing with the first wave of the fight with the Federation. Lars aims and shoots only at the Innovades. “Pretend humans have no right to live,” Lars declares. And Telicyra objects, “Is there such thing as a life without merit!” Telicyra shields Brad, an Innovade, from a bullet with his body. Sulu rushes over to Telicyra, whose life was saved by a bulletproof vest. Lars points his gun at Telicyra, but he uses his quantum brainwaves to wake up Lars Grise. Then a beam of light came down and destroyed a city. With Lars’ ability is unleashed, a mysterious light draws near Telicyra and Lars. “I’m a fake human… I have no right to live…. I must grant death to fake humans,” Lars mutters. The light stops just in the nick of time, but Telicyra could not discern Lars’ ability either. Telicyra knocks Lars out cold. He checks Lars’ left eye it was replaced with an artificial eye, his link to Veda is disrupted. Telicyra hears that the light was a new Federation weapon (Momento Mori) from the approaching Sulu and Hermiya. He returned to the base and the massacre had already taken place. The combat-use Innovade, Brad, attacks Sulu saying “Eliminate the eye-witnesses!” Seeing that spectacle, Lars uses his ability and remote-controls three MSJ-06II-A Tieren Ground Type. The Tierens’ come to life at once to attack Brad, killing Brad in the process. A light pierces the three Tierens. CB-001 1 Gundam descends from heaven like an angel.

Lars contacts Mememto Mori to attack Leif and 1 Gundam, but he protected himself using 1 Gundam's GN particles. In order to stop the battle, Bryn tested the access of Lars using QBW. Telicyra stops Leif who tried to throw the finishing blow to Lars who was suffering said, "I get it now! You and Leif are different people!" Lars then threatened Lief or Beside Pain if he dies the comrades he discovered will not be able to be awakened so Leif backs away. Bryn is the son of Lars. Also, Pity hope Bryn, who was his "mother", with her family memories left behind, was sent to a special mission by Veda but Bryn whose memories have been erased was restored to society as a different child. Bryn wishes, "I want to entrust Lars to you". Lars is tied up and taken to Telicyra's mansion. At Telicyra's place, Lars receives data or memories of his wife (Anew Returner) at Celestial Beings hideout. He walks out and tells Bryn that he will not die until he atones for his sins. Bryn plead for him to stay. With Lars refusing, Bryn sends a QBW message to Sulu and Hermiya saying, "Stop my father."

At Ribbons' mansion Lars appears walking towards Ribbons and points his gun at him. He then lowered it and says, "Stop your foolish actions". Ribbons, seeing his change of mental state murmurs, "This is a verification that even an Innovade can evolve." Ribbons reveals that he receives information from the six comrade candidates, and proposes that he would give Lars an Innovade with the same type as Anew Returner to cease his sufferings. Lars rejects Ribbons' proposal and then Lars cuts off Ribbons with a question, "How far are you related to the search of the six companions?" Ribbons replies, "I am a person who took over the plans of Aeolia, and I believe that it is important to the plan that Veda accomplishes the assembling of the six comrades. That's why I collaborate completely with the search for them." Then, Ribbons whispered that "his own acquaintances are not suitable to be the six comrades."

Lars went away quietly, and Ribbons saw him off with a bold smile. Lars heads back to Telicyra's place. Beside in the CB-001.5 1.5 Gundam attacks the mansion of Telicyra, but Lars’ power of “controlling machines” has taken control of the 1.5 Gundam. Beside reluctantly leaves. In space, Lars learns his true purpose is to become the new observers and to perfect Aeolia Schenberg's plan that is to be accomplished through the help of three important parties: human, Veda, and Innovades. When Regene Regetta decides to eliminate the other five comrades in pursue of his own goals, Telicyra, Leif, Lars and Bryn agreed to remove him from the group, triggering Hermiya's ability and causing Regene to lost all memories related to the six comrades and his awakened ability. In the epilogue of Gundam 00I chapter 14, Lars went back to isolation while his son Bryn is living with Telicyra, Sulu, and Hermiya.

Bryn Sondheim
Bryn Sondheim is the son of Lars before his memory was erased by VEDA to live in society as a different child. 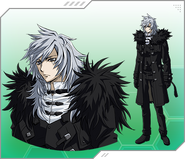 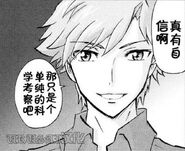 Lars in his early days