He is an EFF Experimental Unit mobile suit pilot under Matt Healy who normally took on the role of sniper during the One Year War. He fosters friendship forged on the battlefield with enemy pilot Garsky Zinobaev, and was even entrusted with a letter addressed to Zinobaev's wife and children. In the manga, he is killed during the battle of Jaburo. 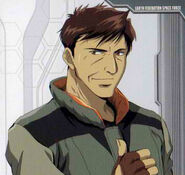