A Commander in the Space Revolutionary Army, he stays on after the final battle in the 7th Space War to become a trainer, teaching the newest members of their forces. When Garrod Ran appeared in space piloting the Gundam Double X, Lancerow launched thinking that it might be his old rival Jamil Neate. He damages the new Gundam and almost succeeds in capturing it till it is rescued by Pala Sys in the G-Falcon. Returning to the space colony Cloud 9, he meets with his friend Nicola Fafas and is introduced to Tiffa Adill. The young girl tells him that she knows Jamil and that the man is no longer a part of the United Nations Earth military, and is instead fighting to rescue and save Newtypes from the newly formed New United Nations Earth. Discovering this he starts to question the orders of the SRA leader Seidel Rasso, and on a mission to destroy the group opposed to the SRA called Satelicon he meets up with Garrod once more and talks with him as they fight to find out more information. Getting a communication from his friend Nicola he finds out that it is a last will and testament sent after he was executed for questioning Rasso.

With his faith shaken in the command ability of Rasso and the start of the 8th Space War, he follows Jamil to the Moon and is escorted into D.O.M.E. where the true meaning of what it means to be a Newtype is revealed. He joins with Jamil and the crew of the Freeden II in the final fight of the war, returning to the SRA afterwards to help work towards peace. 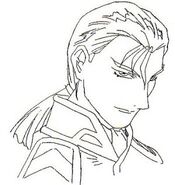 Retrieved from "https://gundam.fandom.com/wiki/Lancerow_Dawell?oldid=440614"
Community content is available under CC-BY-SA unless otherwise noted.