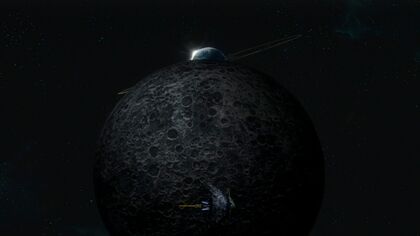 The Sun–Earth L2 is a good spot for space-based observatories. Because an object around L2 will maintain the same orientation with respect to the Sun and Earth, shielding and calibration are much simpler. The Wilkinson Microwave Anisotropy Probe is already in orbit around the Sun–Earth L2. The future Planck satellite, Herschel Space Observatory, Gaia probe, and James Webb Space Telescope will be placed at the Sun–Earth L2. Earth–Moon L2 would be a good location for a communications satellite covering the Moon's far side.

where R is the distance between the two bodies.

This distance can be described as being such that the orbital period, corresponding to a circular orbit with this distance as radius around M2 in the absence of M1, is that of M2 around M1, divided by $ \sqrt{3}\approx 1.73 $.

An asteroid base (Rezorus)of the anti-government resistance base Katharon and CBS Celestial Being are located at L2 in the series.

The colonies of Side 3 are located at L2 in this universe.

Retrieved from "https://gundam.fandom.com/wiki/Lagrange_2?oldid=104258"
Community content is available under CC-BY-SA unless otherwise noted.