The Lab Transport is Celestial Being’s tactical transport ship. Its primary function is to deliver its cargo between their secret Lagrange asteroid base(s) and the CBS-74 Ptolemaios 2 (Ptolemy II) . The ship itself seem to be composed of spare parts that have been recycled and rebuilt into a usable spacecrafts. CB had produced a series of Containers for their 3rd generation Gundams, and the engineers combined a pair of those MS containers with a spare bridge module from Ptolemy II to form the Lab Transport. Helm, communications, and weapons are controlled from this bridge, which supports a 5-man crew. The ship also carries an undefined number of Haros and Karels to help maintain and run the ship; it minimizes the need for a larger crew and simplifies many routines for the crew members.

The ship utilized GN Particles stored in its GN Condensers for both propulsion and power. However, if a Gundam is aboard the ship, it can siphon its particles as its power source. The ship can use its container space to hold up to two mobile suits or to store cargo. When it's time to unload the goods, the Haros and Karels can handle the majority of the manual labor while the crew manages the shipment via remote access. In terms of weapons, the ship has four GN Missile Launchers on the underbelly of the MS Containers. The missile launchers are locked in a fixed position and have a 45 degree firing solution. If the ship is carrying mobile suits within the containers, they can sortie to help defend the ship. Because the ship utilizes GN Particles, its hull's tensile strength is comparable to a GN Shield. The ship was shown to be strong enough to withstand the impact of over a dozen Trans-Am GNZ-004 Gagas ramming into it before it was compromised.

If the ship is paired with Ptolemy II in battle, the ship would utilize a peek-a-boo (coming up to fire and quickly hide) method of combat. Taking advantage of Ptolemy II's mass and GN Field for shielding, it would remain behind Ptolemy II (or the opposite side of where the enemy targets are) to avoid direct combat and evade enemy fire. The ship would maneuver around Ptolemy II to provide combat support by firing at targets that are in Ptolemy II's blind spots and to provide additional firepower. As the ship wasn’t designed for direct combat, it has limitations to its ability to attack and defend. Additionally, because the ship is held together by winged pieces of E-Carbon, a precise hit could possibly rip the ship apart.

A dual of missile/torpedo launchers and missiles are located at the underbelly of each container, totaling four launchers; its exact location under the containers and missile/torpedo count is unknown. The missiles/torpedoes are most effective in mid-to-long range targets, specifically against enemy mobile suits and spacecrafts.

Location underside where 2 containers connect is one 8 tube missile launcher. The missiles are most effective in mid-to-long range targets, specifically against enemy mobile suits and spacecrafts.

Linda Vashti and CB engineers completed the power-up components for the Gundams. They anticipated a difficult battle ahead and brought everything they could think of to help their comrades. After loading up all supplies, the 0 Gundam (Type A.C.D), and the Gundam Exia Repair II, Linda and the ship's crew left their resource satellite to rendezvous with Ptolemy II. Once they reached their destination, they began transferring all their equipment to Ptolemy II and remained with them as combat support.

Not long after re-supply Ptolemy II and upgrading the Gundams at L5, the Ptolemy II's crew and Meisters decided to head to L2 to reclaim Veda. The transport ship remained at Ptolemy II's side for the journey and encountered A-Laws forces. While the Gundams engage A-Laws' mobile suit squads, Ptolemy II and the transport ship fired GN Missiles upon their enemies to support the Gundams and defend themselves. Three A-Laws battlecruisers were going to ram into Ptolemy II and there wasn't enough firepower to stop them, Sumeragi had 00 Raiser finish off the ships with Raiser Sword. After the ships were destroyed, it's been revealed they had anti-field particles within the ships. The particle disrupting field greatly weakened all beam weaponry on the battlefield, but didn't hinder the ship as it only had GN Missiles.

A-Laws' primary attacking force engaged all Celestial Being units and ships with their own GN Missiles and were being overwhelmed in combat. The transport ship and its crew continued to fire GN Missiles to relieve Ptolemy II, but remained behind Ptolemy II's GN Field to avoid direct hits. After Katharon and the ESF Coup d'état Faction entered the battle, odds of survival greatly increased. Ptolemy II and the transport ship eventually exited out of the anti-field and continued their assault against A-Laws. While in the middle of combat, Setsuna/00 Raiser warned everyone to take evasive maneuvers as a powerful particle beam was about to hit them. The transport ship survived the attack and continued to support Ptolemy II. After the beam fired, the colony-type ship Celestial Being revealed itself to all forces.

Sumeragi declared their last mission, to fight through A-Laws and Innovators to reclaim Veda within Celestial Being. Ptolemy II charged towards Celestial Being and the transport ship followed. The Innovators then deployed the GNZ-004 Gagas that launched a suicide charge and rammed into the Ptolemy II. While the GN Field was holding, the excessive numbers of Gagas attacking them began penetrating through Ptolemy II's GN Field. To protect Ptolemy II and its crew, the transport ship's crew moved to shield Ptolemy II from the kamikaze attacks. Because the ship has no GN Field nor special counter measures, the ship continued to shield Ptolemy II until its hull was compromised and exploded.

After an alien race known as the Extraterrestrial Living-metal Shape-shifters, or ELS, came into the Solar System, Ian Vashti and Linda decided to deliver the nearly finished 00 Qan[T] to the Ptolemy II kai crew for the final battle. They used the Lab Transport to deliver the 00 Qan[T] as well as upgrades for GN-010 Gundam Zabanya and GN-011 Gundam Harute to help in the battle; the ship wasn't sent to combat.

Being hammered by Gagas

Cruising through asteroid base

Braking to a stop 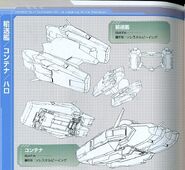