The La Vie en Rose is known for being a dock-able orbital manufacturing plant and the facility that last held the RX-78GP03 Gundam "Dendrobium Orchis" for elaborate field-testing after its subsequent delivery from the Von Braun lunar facility. The La Vie en Rose serves both as a heavy repair facility and testing platform for Anaheim Electronics. It is also one of three main facilities owned by Anaheim Electronics used to produce and repair mobile suits and even be deployed as a drydock to service the larger space warships of the Earth Federal Space Force. The facility is distinctively characterized by its ability to dock with ships via its four large arm servos, which clamp down on the ship while docking, and extend out when not docked with a ship. In either configuration, the mobile docking facility looks like a flower.

The most critical role played by La Vie en Rose happened during Operation Stardust, after Anavel Gato uses the stolen RX-78GP02A Gundam "Physalis" nuclear warhead against the Earth Federation's naval review at Konpei Island, destroying roughly two-thirds of the Earth Federation's fleet and heavily damaging the remaining third. After losing the RX-78GP01-Fb Gundam "Zephyranthes" Full Burnern in a battle with the Gundam "Physalis" after the tactical nuclear strike, the Albion went to the La Vie en Rose. Upon docking with the ship, it was revealed that Admiral Kowen was no longer head of the Gundam Development Project, and the Federation liaison officer overseeing its development restricted the movements of the Albion's crew, allowing only Nina Purpleton, Ensign Kou Uraki, and Captain Eiphar Synapse access to the La Vie en Rose. He also prevented the Albion from acquiring the Gundam "Dendrobium Orchis", citing the current situation with the Delaz Fleet.[1]

On the La Vie en Rose, the Albion crew met Lucette Audevie, the chief engineer of the Gundam "Dendrobium Orchis". Lucette was an acquaintance of Nina and knew a lot about her, and chose to reveal some of the personal and private information about Nina to Kou, during his time trying to get familiar on the "Orchis", causing an even greater rift between Kou and Nina. Lucette was tragically killed by the Federation liaison officer after trying to help Kou "steal away" the Gundam "Dendrobium Orchis" after it was revealed that a ship from Haman Karn's Axis Zeon had given the AMA-002 Neue Ziel mobile armor to the Delaz Fleet and that Delaz planned to send a space colony crashing into earth. After the crew of the Albion neutralized the Earth Federation Space Stronghold Defense Unit on the La Vie en Rose, Kou commandeered the Gundam "Dendrobium Orchis" and went out to find the Delaz Fleet and the Neue Ziel.[1]

Due to Anaheim Electronics' profit-oriented mindset and the trade restrictions imposed on it by the Titans during the events of Gryps War, Anaheim was instrumental in helping the Anti Earth Union Group (AEUG) in its fight against the Titans by helping AEUG members hide out in various Anaheim facilities, including the La Vie en Rose.

During the First Neo Zeon War, the acting captain of the La Vie en Rose, Emary Ounce, uses the ship to help house the members of the AEUG in their fight against Haman Karn's Neo Zeon movement, as well as provided a mobile dock where the Argama could be repaired. In addition, she flirts with Bright Noa, who tests his loyalty to Mirai Yashima.

Near the end of the First Neo Zeon War, the La Vie en Rose was heavily damaged by the NZ-000 Queen Mansa piloted by Ple Two, who launched a massive funnel attack on the ship, killing Emary Ounce in the process.[2] After the First Neo Zeon War, it is unknown what becomes of the ship class: whether it was decommissioned, still in use, or eventually sold off when Anaheim loses its contracts to the Federation think-tank Strategic Naval Research Institute (SNRI) during the events of Mobile Suit Gundam F91. (Some Gundam-related materials suggest that La Vie en Rose was destroyed during an uprising, but that remains unconfirmed.)

In U.C. 153, a La Vie en Rose-class ship: the La Vie en Rose IV; was utilized by the League Militaire in their struggle against the Zanscare Empire.[3]

Also known as the Lotus Fortress, the La Vie en Crab is a customized variant used by the GBN force Lotus.[4] 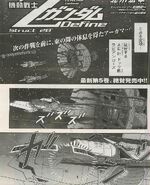 La Vie En Rose as featured in Advance of Zeta: The Flag of Titans picture novel

The phrase la vie en rose is French for "life through rose-coloured glasses" or literally "life in pink". It is also the title of the signature song of famous French singer Édith Piaf and also famously covered, rendered in English and added with more elaborate brass instrumentation in a re-recording by Louis Armstrong.