The LV-ZGMF-X23S Vent Saviour Gundam is a mobile suit developed from the ZGMF-YX21R Proto-Saviour by the Librarian Works, and was introduced in the photo series Mobile Suit Gundam SEED VS Astray. It is initially piloted by a carbon human clone of Gud Vair but later given to Elijah Kiel. The 'LV' in the suit's model code stands for 'Librarian Vent'.

Vent Saviour is a rare mobile suit for Librarian Works as unlike the others, it is based on one of ZAFT's Second Stage Series mobile suits. Development of it was made possible as an organization close to the Librarian Works was in possession of the ZGMF-YX21R Proto-Saviour. 'Vent' means 'wind' in french, and is a reference to the suit's enhanced atmospheric flight capabilities. The wings, originally on the "Amfortas" plasma beam cannons, are moved to the shoulders. As a result, the wings in MA Mode are now positioned lower, allowing for more efficient generation of lift. The wings can be deployed horizontally for stability during flight in MS Mode. Vent Saviour also has a new sensor with improved atmospheric sensing system mounted in the head, and its armor uses lighter materials, leading to a drop in weight without sacrificing any defensive strength.

Vent Saviour has the same armaments as the Proto-Saviour, and like most Librarian Work's MS, it has a hardpoint for Striker Packs on its back. However, it does not have its own Striker Pack, and has to rely on Striker Packs designed for other Librarian Work's MS. One of the Striker Packs that is extremely useful for Vent Saviour is the "Maga no Ikutachi" striker as the Mirage Colloid particles on it can be manipulated to reduce air resistance.[1] Even with the striker pack, Vent Saviour can still transform between its different modes.[2] While the Proto-Saviour and the Saviour Gundam have two different modes, MS and MA Mode, Vent Saviour has three modes, MS, MA and Fatum Mode. The Fatum Mode is simply the "Amfortas" plasma beam cannons positioned over the shoulders with the suit's wings deployed. This mode combines stable flight performance with high attack power, and is Vent Saviour's characteristic feature.

After the MS was passed over to Elijah, its control was customized to suit his preference and the Librarian Work's mark on the suit was replaced by Serpent Tail's. A limiter was also put in place as Elijah's body could not handle the stress caused by the suit's high speed, and this restricted some of Vent Saviour's capabilities. 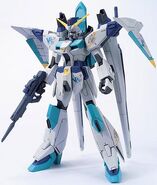 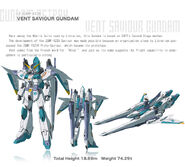 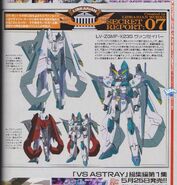