LRX-088 Dezpada, along with its brother machine LRX-077 Sisquiede, was developed as a Newtype-use mobile suit use to protect LRX-066 Tera-S'ono. Dezpada's frame was derived from the Gundam type mobile suit, but with a monoeye sensor. Dezpada is equipped with two large weapon binders, which contain most of its weapons. These weapon binders have two types of missile launchers and four psy-rods, wire-guided grappling weapons similar to the sea serpent used by RX-139 Hambrabi with psycommu-control enhancements. Dezpada also has a beam saber and a beam cannon.

Dezpada also has a special feature known as System Fafnir, which is used to enhance the Newtype ability of its pilot by allowing the LRX-066 Tera-S'ono to control the Dezpada. This makes Dezpada become almost untouchable. While Fafnir's support gives Ein Lewi a great advantage over his old nemesis, his actual skill is inferior and completely relied on Fafnir's ability. When Siegfried discovered the secret of Sisquiede, the Offense Mode, the System Fafnir isn't enough to save him.

Similar to the Sea Serpent Weapons found with the RX-139 Hambrabi and RMS-108 Marasai except with psycommu control, each of the Dezpada's weapon binders has two of these weapons above the Dezpada's shoulders for a total of four. 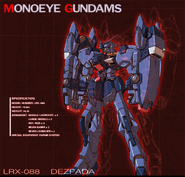 LRX-088 Dezpada lineart
Add a photo to this gallery

Retrieved from "https://gundam.fandom.com/wiki/LRX-088_Dezpada?oldid=499016"
Community content is available under CC-BY-SA unless otherwise noted.