The LRX-077 Sisquiede is a Prototype Mobile Suit from the SD Gundam G Generation video game and manga SD Gundam: G Generation: Monoeye Gundams. It is an uncanonical Mobile suit of the Universal Century time-line although it was developed in the same time as the RX-178 Gundam Mk-II. It is piloted by Siegfried Wedner.

Originally developed as part of the old Principality of Zeon's Monoeye Gundam plan, the project was never realized due to Zeon's defeat in the One Year War. However, the Titans unit obtained data on the project and further developed the concept machines for their own use. The LRX-077 Sisquiede, along with its brother machine LRX-088 Dezpada, was developed as a high performance mobile suit intended to protect the LRX-066 Tera-S'ono. Sisquiede's frame was derived from the Gundam type mobile suit but with a monoeye sensor. Sisquiede was armed with an I-field launcher, a special cannon which combined a long beam rifle with a powerful megacannon. As its name implied, this cannon also housed a built-in I-field barrier generator, providing Sisquiede a strong defense against beam projectiles.

Sisquiede was an extremely high performance suit, easily surpassing many mobile suits of the Gryps Conflict. But since the Titans designed it to be used by an oldtype (to complement the newtype use Dezpada,) it turned out to be too powerful to handle. A custom OS usually limited the performance of the Sisquiede to levels a normal pilot could comfortably handle. This limiter could be unlocked and Sisquiede switched to Offense Mode, allowing it to fight with its full potential. However, the Offense Mode puts an excessive amount of stress on the pilot and can be active only for a short period.

The I-field launcher is a long beam rifle with a combination Mega particle cannon and I-field generator attached to it as well.

Sisquiede was stolen from Gryps space colony by Sigfried Wedner, an Anti-Earth Union Group member and former member of Zeon's special forces, at roughly the same time the Gundam Mk-II was stolen by Quattro Bajeena and Kamille Bidan. It was later painted in a similar color scheme to the Gundam Mk-II and used as Sigfreid's personal mobile suit.

It's early colors is a tribute to the RX-178 Gundam Mk-II Titans version. When the unit appears again in SD Gundam G-Generation DS, it's colors were changed to the usual Gundam colors. 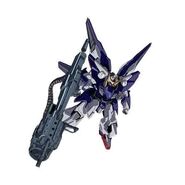 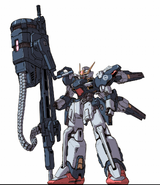 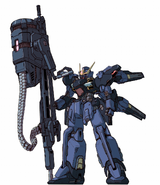 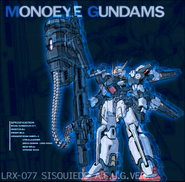 Fanmade Lineart
Add a photo to this gallery

Retrieved from "https://gundam.fandom.com/wiki/LRX-077_Sisquiede?oldid=230286"
Community content is available under CC-BY-SA unless otherwise noted.