The LN-GAT-X207 Nebula Blitz is a variant of the GAT-X207 Blitz Gundam developed by the mysterious organization known as Librarian Works. The unit first appeared in the photo series Mobile Suit Gundam SEED VS Astray, and is piloted by Lily Thevalley. The LN in the suit's model code stands for "Librarian Nebula". 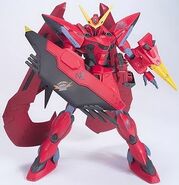