The LM314V24 Victory 2 Assault Gundam is one of several upgrades to the LM314V21 Victory 2 Gundam featured in Mobile Suit Victory Gundam. It is piloted by Uso Ewin.

The Victory 2 Assault Gundam is the Victory 2 Gundam with additional armor and weaponry, enhancing its assault and melee-combat capabilities. While the mobile suit's mobility and maneuverability are slightly reduced by the added armor on its shoulders, waist and knees, they grant it better protection against physical projectiles and beam attacks.

These added armor are actually reactive armor that break apart upon being hit to protect the Victory Gundam underneath. To defend against beam attacks, these armor have gold-colored, anti-beam coating on the surface, but the coating's effectiveness is reduced with each hit. Additionally, the added shoulder armor are equipped with I-Field generators, allowing the Victory 2 Assault Gundam to generate a powerful anti-beam barrier.

The Victory 2 Assault Gundam's defense is further boosted by a mega beam shield that can generate an extremely large beam shield and is equipped with barrier bits to defend against attacks from various directions. To enhance the mobile suit's offensive power, a pair of VSBRs (Variable Speed Beam Rifle) are mounted on the side skirt and a high-output mega beam rifle can be utilized in place of the standard beam rifle.

Mounted below the barrel of the Victory 2 Assault's beam rifle, it can load and fire various physical projectile.

A grenade launcher can be mounted below the Victory 2 Assault's beam rifle's barrel in place of the Multi-Launcher.

The beam sabers are powerful melee weapons that emit a blade of plasma contained by an I-field. The V2 Assault Gundam stores two beam sabers in storage racks located in each forearms, for a total of four beam sabers.

The V2 Assault Gundam is equipped with two beam shields, mounted on the forearms. Unlike an I-field generator, which is effective only against beam attacks, the beam shield blocks both beam and projectile weapons. The beam shield generates a plane of energy similar to the blade of a beam saber. This plane is divided into multiple sections, which can be turned on or off as needed to conserve energy. Individual sections are also automatically deactivated whenever they're in danger of coming into contact with the mobile suit itself.

A high output beam cannon with an open mega particle compression-accelerator device. It is an enhanced, lighter version of the LM312V04+SD-VB03A V-Dash Gundam's Beam Smart Gun.

A shield that mounts 3 barrier bits which can be deployed to produce an extremely large beam shield. The bits' positions can be changed freely to defend against enemies' attacks.

The Victory 2 Assault Gundam is outfitted with a unique targeting sensor stored in the mobile suit's helmet that slides over the left eye when in use for highly detailed and precise targeting.

Hardpoints are attachment points for carrying any compatible weapons or equipment externally, and are standard equipment for all League Militaire mobile suits. The Victory 2 Gundam is equipped with ten hardpoints: two on each arm, one on each side armor, and two more on each leg.

The V2 Assault Gundam was first seen after Katejina Loos's ZMT-S33S Gottrlatan destroyed the mega beam cannon and beam spray pod of the Assault-Buster configuration. Uso then battled the Gottrlatan and the surrounding Einrad squadron before infiltrating the Angel Halo. Once inside, the "bikini squadron" (the pilots of the Einrad squad Uso encountered outside) attacked the V2 Assault with rocket launchers, destroying its armor and reverting the suit back to its original Victory 2 Gundam form.

It is later deployed for the final battle on Earth against the remaining Zanscare forces, where it defeated Cronicle Asher's ZMT-S34S Rig Contio as well as successfully defending against the Gottrlatan's Mega Beam Cannon with the Wings of Light, before Uso used the Gundam to rescue Shakti, who descended from the Angel Halo, marking the end of the war. 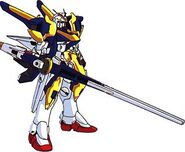 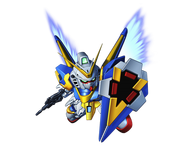 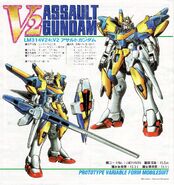 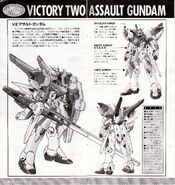 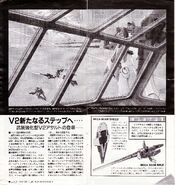