The LM314V23 Victory 2 Buster Gundam is a one of several upgrades to the LM314V21 Victory 2 Gundam featured in Mobile Suit Victory Gundam. It is piloted by Uso Ewin.

Besides the standard armament of the Victory 2 Gundam, the Buster configuration grants the Gundam several heavy weapons. This new weaponry includes a large mega beam cannon, a beam spray pod (both weapons mounted over the shoulders of the suit) and six micro-missile launcher pods, which can be used to attack multiple targets at once.

Mounted below the barrel of the Victory 2 Buster's beam rifle, it can load and fire various physical projectile.

A grenade launcher can be mounted below the Victory 2 Buster's beam rifle's barrel in place of the Multi-Launcher.

The Victory 2 Buster Gundam is equipped with four beam sabers stored in the forearms when not in use.

The Victory 2 Buster Gundam is equipped with two beam shields, one mounted in each forearm. The beam shields are also operable when the Top Fighter is operating independently.

A long range beam cannon mounted on the back. Its attack range and firepower is comparable to the Gryps war-era's mega bazooka launcher and hyper mega launcher. Useful in anti-fleet battle.

The Victory 2 Buster Gundam is equipped with 6 micro-missile pods, 2 attached to the hardpoints on the legs and 1 attached to each front skirt and rear skirt armor.

To cope with different combat situations, the Victory 2 Gundam is able to be outfitted with two different sets of armament. One of these armament sets is the Buster configuration, which is used for heavy battles. 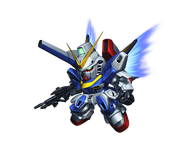 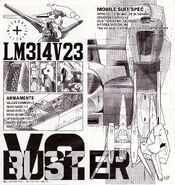 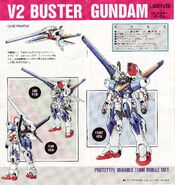 Retrieved from "https://gundam.fandom.com/wiki/LM314V23_Victory_2_Buster_Gundam?oldid=440151"
Community content is available under CC-BY-SA unless otherwise noted.