The LM314V23/24 V2 Assault-Buster Gundam is one of several upgrades to the LM314V21 Victory 2 Gundam featured in Mobile Suit Victory Gundam. It is piloted by Uso Ewin.

To cope with different combat situations, the Victory 2 Gundam can be equipped with two different sets of optional parts, creating the LM314V24 Victory 2 Assault Gundam and the LM314V23 Victory 2 Buster Gundam. As the parts of the Assault and Buster configurations do not overlap, it is possible to mount both sets simultaneously, creating the Assault-Buster configuration which has overwhelming offensive power and high defensive capabilities. However, it increases the V2's overall mass considerably.

The beam sabers are melee weapons that emit a blade of plasma contained by an I-field. The V2 Assault-Buster Gundam stores two beam sabers in each forearms, for a total of four beam sabers.

The same hand carried ranged beam weapon as used by the normal Victory 2. Capable of firing concentrated mega particles. attacks from a beam rifle can damage any ordinary armor that has not been specially treated to resist it.

Mounted below the barrel of the Victory 2 Assault-Buster's beam rifle, it is capable of loading and firing a variety of physical projectiles.

A long range beam cannon mounted on the back. Its attack range and firepower are comparable to the Gryps War-era's Mega Bazooka Launcher and Hyper Mega Launcher. The weapon is most useful during anti-fleet operations.

The V2 Gundam is equipped with two beam shields, mounted on the forearms. Unlike an I-field, which is effective only against beam attacks, the beam shield blocks both beam and projectile weapons. The beam shield generates a plane of energy similar to the blade of a beam saber. This plane is divided into multiple sections, which can be turned on or off as needed to conserve energy. Individual sections are also automatically deactivated whenever they're in danger of coming into contact with the mobile suit itself.

A shield that mounts 3 barrier bits which can be deployed to produce an extremely large beam shield. The bits' positions can be changed freely to defend against enemies' attacks. The shield can also unleash a V-shaped beam at the opponent.

The V2 Assault-Buster Gundam can be equipped with the same micro-missile pods as the V2 Buster Gundam. Two can be attached to the hardpoints on the legs, and one attached to each front skirt and rear skirt armor.

A high output beam cannon with an open mega particle compression-accelerator device. It is an enhanced, lighter version of the LM312V04+SD-VB03A V-Dash Gundam's Beam Smart Gun.

The Victory 2 Gundam is outfitted with a unique targeting sensor stored in the head that slides over the left eye when in use for highly precise targeting.

Hardpoints are attachment points for carrying any compatible weapons or equipment externally, and are standard equipment for all League Militaire mobile suits. The Victory 2 Gundam is equipped with ten hardpoints: two on each arm, one on each side armor, and two more on each leg.

Uso only used the V2 Assault-Buster Gundam once, during the Battle of Angel Halo. It dueled with the ZMT-S33S Gottrlatan before Katejina destroyed the Mega Beam Cannon and the Spray Beam Pod unit, reverting the V2 back to its Assault configuration. 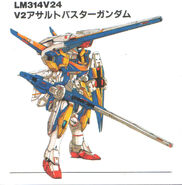 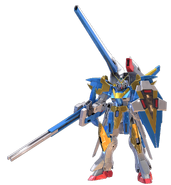 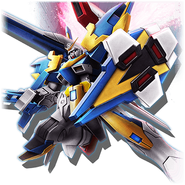 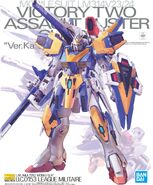 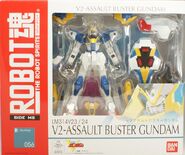