The Victory Gundam Hexa is the Victory Gundam with a new model of Core Fighter that features a modified mobile suit head for use by squadron leaders, its overall combat abilities are identical. Aside from the fact that the "rabbit ears" give the Hexa a distinctive appearance, the new head unit features a more advanced sensor and communication system. With the improved equipment, the pilot of the Hexa would have superior knowledge of battlefield conditions and be more capable of piercing electronic countermeasures and maintain contact with comrades.

The Victory Gundam's vulcan guns utilize a pair of 25mm revolver cannons, rather than the 60mm rotary cannons commonly used by mobile suits from decades ago, which are too large for a miniaturized mobile suit. They have a lower rate of fire and smaller ammo capacity compared to the 60mm vulcans. However, the high accuracy of the Victory Gundam's fire control system makes up for these shortcomings.

The beam saber is a small device held in the mobile suit's hands when deployed and is powered by a rechargeable energy capacitor. It emits high-energy Minovsky particles to form a blade-shaped I-field (via manipulation of electromagnetic fields), and then fills this I-field shell with superheated Minovsky particle plasma to produce an effective cutting blade. The Victory Gundam Hexa has four beam sabers stored in forearm storage racks.

The Victory Gundam Hexa's beam rifle is modular, with a small beam pistol serving as its core. Parts of the beam rifle can be purged to reveal this beam pistol. While boasting a rapid firing rate, the beam pistol is only effective at close range.

A pair of beam cannons can be optionally mounted on the hardpoints on the suit's side armor and powered by the suit's reactor. The cannons' barrels can slide forward during use to reveal hand grips, and the weapon is equivalent to the F91 Gundam F91's Variable Speed Beam Rifles. 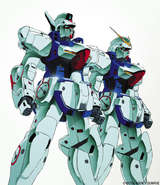 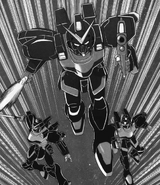 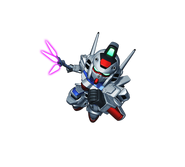