The LM312V04+SD-VB03A V-Dash Gundam is a variant of the LM312V04 Victory Gundam equipped with the SD-VB03A Overhang Pack. This new equipment consisted of booster units and a pair of high-power beam cannons, the Overhang Cannons, and together, they grant the V-Dash Gundam much higher mobility, cruising range and firepower than the original Victory Gundam.

Additionally, the Overhang Pack improves the suit's reactor output by 190kW, raising the total output to 4970kW, and increases the Gundam's hardpoints from ten to twelve, meaning it can now carry two additional pieces of equipment. The Victory Gundam's Core Fighter changes into the Core Booster when equipped with the Overhang Pack.

The Victory Gundam's vulcan guns utilize a pair of 25mm revolver cannons, rather than the 60mm rotary cannons commonly used by mobile suits from decades ago, which are too large for a miniaturized mobile suit. They have a lower rate of fire and smaller ammo capacity compared to the 60mm vulcans. However, the high accuracy of the Victory Gundam's fire control system makes up for these shortcomings.

A triple beam saber with long pole handle. The pole handle can be fold and stored on external hardpoints.

The beam saber is a small device held in the mobile suit's hands when deployed and is powered by a rechargeable energy capacitor. It emits high-energy Minovsky particles to form a blade-shaped I-field (via manipulation of electromagnetic fields), and then fills this I-field shell with superheated Minovsky particle plasma to produce an effective cutting blade. The V-Dash Gundam has four beam sabers stored in forearm storage racks.

By generating a plane of energy similar to the blade of a beam saber, the beam shield can block both beam and projectile weapons. The size of the beam shield can be adjusted freely according to the output, and can expand to a maximum size of 150m-200m in a short period of time to defend warships. The generator can be pivoted approximately 180 degrees on the vertical axis, in addition it is possible to freely change the defense direction by rotating the arm itself. The V-Dash Gundam is equipped with two beam shields, one mounted on each forearm.

Also known as the Mega Beam Rifle, it is a high output beam cannon with an open mega particle compression-accelerator device. Originally created for another mobile suit, the weapon was found by chance in an abandoned hanger located in the Highland solar power satellite. Although designed thirty years ago during the Cosmo Babylonia wars era, it still possesses practical performance in the U.C. 0150s. It is later put into mass-production and referred to as the "laundry-drying pole".

The vulcan cannon is a large hand-held shell-firing weapon. The ammunition is stored in a large drum and is chemically propelled at high speed down the revolving five-barrel barrel.

The docked form of the SD-VB03A Overhang Pack and Core Fighter.

During the Earth Federation's war with the Zanscare Empire, the League Militaire became a dominant force in the fight against the space-born empire. They became a symbol of freedom and justice thanks to their mass-produced LM312V04 Victory Gundam, which was a powerful mobile suit based on the legendary Gundam from the One Year War. However, despite being a versatile mobile suit with exceptional melee combat abilities, the Victory Gundam's abilities were determined to not be enough against the numerically superior Ballistic Equipment and Space Patrol Armory forces that were continually rolling out new models of mobile suits. 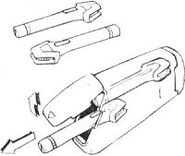 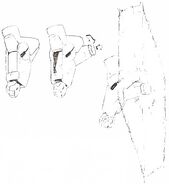 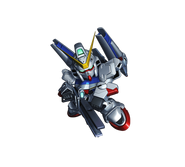 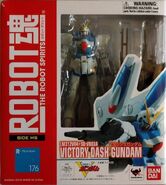 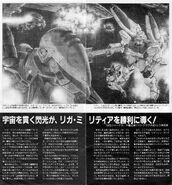 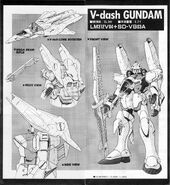 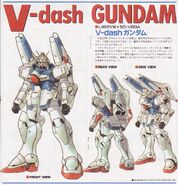 Retrieved from "https://gundam.fandom.com/wiki/LM312V04%2BSD-VB03A_V-Dash_Gundam?oldid=440964"
Community content is available under CC-BY-SA unless otherwise noted.