The LM111E03 Gunblaster (aka Gun Blastor) is a mass-production mobile suit that appeared in Mobile Suit Victory Gundam anime series.

To meet the need for space-use mobile suits, the League Militaire modified their ground-use LM111E02 Gun-EZ into the space combat LM111E03 Gunblaster by adding a pair of "twin tail" thruster binders. The technology behind the binders has existed since the Gryps conflict of U.C. 0087, and involves increasing the number of movable limbs on a mobile suit to enhance the effectiveness of the AMBAC system. The binders also serve to increase the mobile suit's maneuverability, thrust, and fuel capacity which in turn increased the mobile suit's operational range. The binders can be ejected when necessary. Aside from the addition of the binders and a slight change to the color scheme, there is little difference between the Gunblaster and its predecessor.

Mounted on the head, the pair of shell firing weapons have high rate of fire but little power. Although ineffective against the armor of a mobile suit, they are suitable for restricting enemy movements, destroying lightly armored targets, intercepting missiles, etc.

The beam saber is a small device held in the mobile suit's hands when operated and is powered by a rechargeable energy capacitor. It emits high-energy Minovsky particles to form a blade-shaped I-field (via manipulation of electromagnetic fields), and then fills this I-field shell with superheated Minovsky particle plasma to produce an effective cutting blade. The Gunblaster has a beam saber stored in the right shoulder's weapon box.

Mounted in the left shoulder's weapon box, it is loaded with two physical projectiles, which are mainly used for restricting enemy movements. This weapon is thought to be for enhancing the mobile suit's firepower without impairing its versatility.

Capable of blocking both beam and projectile weapons, the beam shield generates a plane of energy similar to the blade of a beam saber. This plane is divided into multiple sections, which can be turned on or off as needed to conserve energy. Individual sections are also automatically deactivated whenever they're in danger of coming into contact with the mobile suit itself. The beam shield used by the Gunblaster is an optional equipment mounted on either forearm's hardpoint.

The same type of beam firearm as used by the Victory Gundam, it fires concentrated mega particles that can damage any ordinary armor not specially treated to resist it

An optional, wire-type weapon stored in the right shoulder's weapon box in place of the beam saber.

As the war with the Zanscare Empire and BESPA built units continued to rage on in space it became apparent to the League Militaire that their units had to be upgraded in order to deal with the enemy effectively. Because the League Militaire was limited in its resources its engineers decided to upgrade the existing LM111E02 Gun-EZ into the unit known as the LM111E03 Gunblaster which easily performed on par with many of the Zanscare's Empire's units. After evaluating the effectiveness of the new machine the League Militaire upgraded all of their Gun-EZ mobile suits to Gunblasters to continue service as the main front line units as the front lines moved to space. 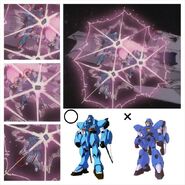 As part of the Coalition of Volunteers, firing Beam Bazooka (from Gundam Build Divers) 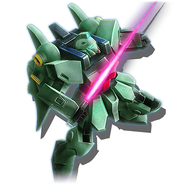