A mass production mobile suit created by the League Militaire, the Gun-EZ can trace its roots all the way back to the test mobile suits made for the development of the LM312V04 Victory Gundam. Adopting the same type of generator as the Victory Gundam, the Gun-EZ has a simple structure without either combining or transforming mechanisms. It also uses a large number of standardized parts, resulting in a mobile suit with high capabilities that surpasses those of the Earth Federation Forces at that time while also being easy to produce and maintain. Though the Gun EZ could not achieve the same altitude, speed, or distance as a flight-type mobile suit, its mobility is more than a match for the beam rotor equipped Zanscare Empire mobile suits.

Mounted on the head, the pair of shell firing weapons have high rate of fire but little power. Although ineffective against the armor of a mobile suit, they are suitable for restricting enemy movements, destroying lightly armored targets, for intercepting missiles, etc.

The beam saber is a small device held in the mobile suit's hands when operated and is powered by a rechargeable energy capacitor. It emits high-energy Minovsky particles to form a blade-shaped I-field (via manipulation of electromagnetic fields), and then fills this I-field shell with superheated Minovsky particle plasma to produce an effective cutting blade. The Gun EZ stores a beam saber in the right shoulder's weapon box. This beam saber has the same output as the ones used by the V Gundam, but is cylindrical in shape.

Mounted in the left shoulder's weapon box, it is loaded with two physical projectiles, which are mainly used for restricting enemy movements. This weapon is thought to be for enhancing the Gun-EZ's firepower without impairing its versatility.

The Gun EZ uses the same type of beam firearm as the Victory Gundam, and it can be stored on one of the hardpoints (such as on the rear skirt armor and legs) when not in use.

A large caliber beam firearm designed by SNRI and produced by Anaheim Electronics. This weapon was supplied to both the League Militaire and Earth Federation Forces, but the ones used by the League Militaire have improved connectors and larger capacity energy pack. It can be stored on the rear skirt hardpoint when not in use, and is also known as "Mega Beam Bazooka".

Capable of blocking both beam and projectile weapons, the beam shield generates a plane of energy similar to the blade of a beam saber. This plane is divided into multiple sections, which can be turned on or off as needed to conserve energy. Individual sections are also automatically deactivated whenever they're in danger of coming into contact with the mobile suit itself. The beam shield used by the Gun EZ is an optional equipment mounted on either forearm's hardpoint.

A weapon borrowed from the LM312V04+SD-VB03A V-Dash Gundam, while it cannot be mounted on the backpack, it can be used as a handheld weapon.

The LM111E02 Gun-EZ served as the backbone of the League Militaire forces during the Zanscare War in UC 0153, and its development was said to have been carried out in underground factories near the lunar city of St. Joseph. As the war progressed and the League Militaire expanded its operations into space, it became necessary to have a mobile suit that had optimum performance in space. For this purpose, many Gun-EZs were modified into LM111E03 Gunblasters. 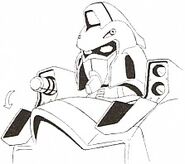 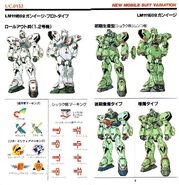