The Minerva is a battleship in the Mobile Suit Gundam SEED Destiny television series.

The Minerva is the first new ZAFT warship constructed since the previous war. Designed for use with Second Stage series mobile suits, it is equipped with a deuterion beam transmitter that can instantly recharge these machines, as well as a complex system of hangars and catapults for launching the components of the Impulse Gundam. The Minerva is also a formidable warship in its own right thanks to its powerful weapons, high speed, and ability to enter the atmosphere and operate on Earth.

As with many other ships and mobile suits, the Minerva mounts a total of twelve 40mm CIWS guns. These guns are used to shoot down incoming missiles but are also effective against close-range mobile suits.

For added defense, the ship is mounted with a large number of anti-beam depth charge launchers, which can release a cloud of beam-absorbing particles to protect the Minerva from enemy beam fire. The particles however also decrease the efficiency of the Minerva's own beam weapons.

For heavier firepower, an M10 "Isolde" 42cm triple cannon is mounted on the main body in front of the Impulse catapult. This cannon is usually hidden underneath a shutter and is retracted if needed.

The largest number of weaponry which the Minerva is mounted with is its missile launchers. Arranged in a series of four-tube launchers on either side of Minerva's hull, they are capable of launching "Neidhardt" space missiles, "Parsifal" ground missiles, or "Dispar" interceptor missiles. Because the launch tubes face laterally, missiles must often rotate ninety degrees after launch in order to travel to their target.

The most powerful weapon of the ship is its single QZX-1 "Tannhäuser" positron cannon, which makes the Minerva the first ZAFT ship to be equipped with a positron cannon. Mounted on the front side of the ship, the "Tannhäuser" is hidden underneath a shutter and only released when activated. It should also be noted that while the "Tannhäuser" cannon is extremely powerful, if it's attacked when it's about to fire, the cannon will overload and cause serious damage to the ship.

As opposed to the missile launchers, the four torpedo launchers are equipped with only one type of torpedo, namely "Wolfram" M25 torpedoes.

In terms of beam weaponry, the Minerva is equipped with two XM47 "Tristan" dual beam cannons. These cannons are mounted above the two standard linear catapults, allowing them to cover the launching of Mobile Suits.

Designed specifically to carry the new Second Generation Gundams of ZAFT, the Minerva is the first (and so far only) ship to be equipped with the Deuterion Beam Energy Transfer System. This allows the ship to recharge the battery of a nearby mobile suit by firing a deuterion beam from a specialized emitter to a receiver on the suit.

The ship can be optionally equipped with a two-stage booster, allowing it to break through Earth's atmosphere on its own. After exiting the atmosphere, the booster's wings are purged and the remaining parts are used for high-speed travel in space.

The Minerva class battleship was the first warship built by ZAFT after the First Alliance-PLANT War. The ship was designed as a naval/space vessel and has carrying space for at least 11 mobile suits including the Impulse. Visually, the Minerva resembles a combination of the Archangel and Eternal from the first war. The first ship of the class, the Minerva, carried the hull classification code LHM-BB01, designating it as both a transatmospheric mobile assault ship (like the Archangel) and a battleship. The Minerva was commanded by Talia Gladys, a veteran ZAFT ship commander who was decorated in the First Alliance-PLANT War for meritorious conduct.

The lead ship, meant to carry the Second Generation of ZAFT's Gundam units, was launched prematurely on October 2, CE 73, with the Impulse, two ZGMF-1000 ZAKU Warriors (one painted in Lunamaria Hawke's personal red colors), one ZGMF-1001 ZAKU Phantom (painted in Rey Za Burrel's personal white colors) and two ZGMF-601R GuAIZ Rs. After its launch, the Minerva followed the Phantom Pain battleship Girty Lue, which had stolen three of the new Gundams. During the first battle between the two ships, the two GuAIZ Rs were destroyed. Later, the Minerva tried to prevent the fall of Junius Seven on Earth by shattering the large fragment with its positron cannon. During this incident, it again battled Phantom Pain as well as several Coordinator extremists. After descending down to Earth, the ship entered the territory of Orb.

When the Second Alliance-PLANT War broke out, the Minerva left the country and headed for the Carpentaria Base, although it was forced to battle the Earth Alliance forces outside Orb's territory. In Carpentaria, one of the ZAKU Warriors was replaced by the ZGMF-X23S Saviour Gundam and one of the GuAIZ Rs was later replaced by a ZGMF-X2000 GOUF Ignited. After leaving Carpentaria, the ship headed towards the Gibraltar Base. On its way, the Minerva fought the EA and its allies of the Orb Union several times, which caused severe damage to the ship and its mobile suits. It was also forced to fight the Archangel, who intervened in several battles. This caused PLANT chairman Gilbert Durandal to order the Minerva to destroy the ship, which they however didn't accomplish, although Shinn was able to destroy the ZGMF-X10A Freedom Gundam. Afterwards, the Minerva finally reached Gibraltar, where it received the new ZGMF-X42S Destiny Gundam and ZGMF-X666S Legend Gundam.

The Minerva later took part in the battles at Heaven's Base and Orb, until it headed to space to capture the EA's superweapon Requiem on the Daedalus lunar base. The ship then took part in the battles against the Three Ships Alliance. During the last battle of the war, the ship was heavily damaged near the Mobile Space Fortress Messiah by the Archangel and Athrun Zala's ZGMF-X19A ∞ Justice Gundam. 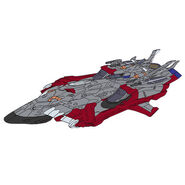 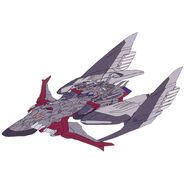 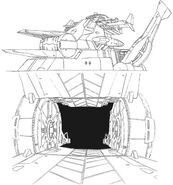 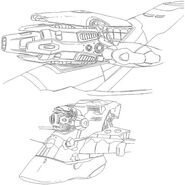 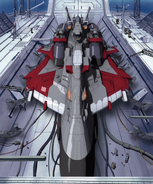 Launching from Armory One

Equipped with Booster for atmospheric exit