The LGZ-91 Lightning Gundam is a Gunpla from Gundam Build Fighters Try.

Yuuma Kousaka's Gunpla that was made based on the Re-GZ that appeared in Char's Counterattack.[1] It has high performance sensors in the shoulders and by coupling the beam rifle for long distance shooting to them, astoundingly precise shots become possible.[1] For that reason, long range attack is the main tactic in battle.[1] On the other hand, it possesses abilities such as being able to travel long distances at high speed by transforming into Flight Mode due to the combination with the Back Weapon System, so it was completed as a machine that is capable of executing multifaceted strategies.[1] From main force to support, it performs extensively in team battle.[1]

Solid bullet armament built into the head.[1] Power is not high, but it has a high rate of fire, so it's employed to intercept incoming missiles, etc.[1]

Armament for melee combat that's stored on the back of the waist side armors.[1] It generates a beam blade.[1]

Built into the left arm.[1] It rapidly fires low power beams.[1] Easier to handle than a handheld gun.[1]

Power is weak, but it's easy to handle due to its small size.[1] It's an effective gun even in close combat since it also supports rapid-fire.[1]

Gun for sniping that has the longest barrel.[1] Higher precision sniping becomes possible by coupling with the shoulder sensors.[1] Equipped with a Sensor Unit containing a side grip.[citation needed]

Equipped in the Shield.[1] It's suitable for interception by firing beams over a wide area.[1]

A pair of 8-tube missile pods mounted on the Lightning Back Weapon System. Can be replaced by a pair of Beam Cannons.[citation needed]

An optional pair of beam cannons that can be mounted on the Lightning Back Weapon System in place of the 8-tube Missile Pods.[citation needed]

It can be even used as a bipod during precision shooting.[1] Combination with the nose part of the Lightning Back Weapon System is possible.[citation needed]

Equipment that's an evolution of the BWS used by the Re-GZ.[2] It can also act as an independent support machine.[2] It actively plays multipurpose roles like reconnaissance and combat support.[2] When combined with the Lightning Gundam, it can transform into a shape that is suitable for flight by changing the positions of the backpack and Shield.[2] In Flight Mode, the thrust is so high that it can fly while carrying another Gunpla on top without compromising the machine's stability.[2] Moreover, while this machine is a dedicated equipment for the Lightning Gundam, it can be used without modification in some Gunpla because it conforms to the Gunpla common standards.[2]

Launcher that's the leg and backpack parts of the SD-237 Winning Gundam combined and transformed.[3] By mounting it on the tip of the Lightning Gundam's rifle, power and range are substantially increased.[3]

It was effectively used in team battles during all the All-Japan Under-19 Division Gunpla Tournament classifiers until Yuuma was defeated by Saga Adou. Then, Yuuma had a motivational battle with Meijin Kawaguchi and regained confidence. The result was the upgrade to the LGZ-91Fb Lightning Gundam Full Burnern.[citation needed] 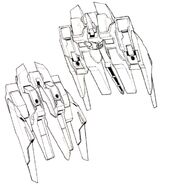 Beam Saber and its rack

Transparent view of the crotch part