Kyoji is a kind and gentle person who loves his younger brother. He taught young Domon to have faith in others, and Domon's childhood friend, Rain Mikamura, recognized him as a warm-hearted person because of his personality.

Kyoji Kasshu was one of the scientists who worked on the Ultimate Gundam along with his father, Dr. Raizo Kasshu, a Gundam that would be more powerful than any developed before for the purpose of restoring the Earth. Taking the Ultimate Gundam, Kyoji escaped from the colony of Neo Japan and traveled to Earth. The damage that was taken by Ultimate Gundam and its artificial intelligence, caused it to become the Devil Gundam, and Kyoji its pilot. However, the true story that was revealed to Domon during the finals of the 13th Gundam Fight in Hong Kong. When Major Ulube Ishikawa of the Neo Japanese military, who decided to use the Ultimate Gundam for his own evil schemes, attempted to confiscate the Gundam, Dr. Kasshu told Kyoji to take the Ultimate Gundam to Earth to keep it out of the hands of the military. In the ensuing chaos, Domon's mother, Mikino, was fatally shot when she shielded Kyoji from the gunfire from one of Ulube's soldiers as her son evaded the Neo Japan military to Earth while his father was sentenced as a scapegoat. However, the force of the landing on Earth corrupted the Ultimate Gundam's programming, which made it believe that killing all of the humans was the only way to save the Earth as it absorbed Kyoji as its core, infected him with DG cells, and used him as a power source to do its bidding. However, using what little free will that he had left, Kyoji used the DG cells on Neo Germany's Gundam Fighter who was killed by the Devil Gundam, and reanimated him into an android in his image, Schwarz Bruder, in order to help Domon grow as a fighter and prepare him when the time came to end his life.

By the time that Domon found his brother, unaware he was not in control of the Devil Gundam, at the ruins of Shinjuku, Kyoji was a shell of his former self when Domon attempted to reason with him. During the battle, the Devil Gundam absorbed the power of Domon's Shining Finger Sword in order to fuel its second evolution. Due to the interference of Schwarz Bruder, Domon was able to build himself up enough to take on his brother again and believed to have killed him during the battle at the Guiana Highlands. However, the Devil Gundam survived and was brought to Neo Hong Kong by Wong Yunfat, with Kyoji's near-death body still in its core as Wong and Master Asia searched for a new life core unit to replace him. During the Battle Royale on Lantau Island, Schwarz attempted to get Kyoji out of the weakened Devil Gundam, only to be grabbed to take his creator's place as he ordered Domon to kill them both. Having finally realized the tragic truth behind his brother, Domon tearfully did his Sekiha Tenkyoken, incinerated both Kyoji and Schwarz, and seemingly destroyed the Devil Gundam.

Kyoji and Schwarz's final moments before being blown up by Domon/God Gundam's finisher. 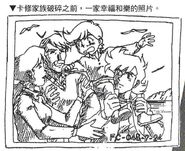