Kycilia Zabi (キシリア・ザビ, Kishiria Zabi?) is a character that appears in Mobile Suit Gundam. She was the only daughter of Degwin Sodo Zabi.

Kycilia had political ambitions at a young age and tried to establish military power and political channels on her own in order to compete with her eldest brother Gihren, but she realized that it would be difficult to do so in a straightforward manner against Gihren, who was older than her and had already thrown himself into politics. Perhaps because of this, she tends to focus on new things such as mobile suits and newtypes.

Kycilia was quick to adapt to the changing technology of the One Year War and was equally proficient in gathering intelligence for use against the Federation. She was in charge of the Zeon Army's MS Forces and was responsible for their use against the Federation. In addition, she was responsible for the creation of numerous elite Mobile Suit units, including Char Aznable's (while aware of his true identity),[1] 300th Independent Corps (aka Char's Newtype Corps), the hand-picked Chimera Corps, and the Midnight Fenrir covert ops team.

Kycilia was 24 years old[2]. As the Earth Sphere moved towards war Kycilia was finally given high military command in the Zeon field forces. Taking over the Zeon Army's Mobile Assault Force, she sets herself up on the Lunar cities and brings under her control various aspects of the Zeon war effort like; Special Operations, Research and Development, and Espionage. She creates several special military units throughout the war and commands a sizable fleet from her Lunar HQ.

During the Battle of Loum, she ordered her fleet to withdraw as soon as the main engagement was over, allowing her brothers' fleets the "glory" of mopping up the Federation's retreating troops while preserving the lives of the men under her own command. A veteran of the battle, Lieutenant Commander Gerhart Schmitzer (who had been too seriously wounded in the fight to continue active combat piloting), approached her during the Antarctic Treaty cease-fire. He proposed the formation of a small Earth-bound covert-operations unit, to be named the Midnight Fenrir Corps. She immediately approved.

In the latter half of the One Year War, she took Char Aznable under her wing after Dozle Zabi dismissed Char from his forces for failing to protect Garma. With her support, he proceeded to form the 300th Independent Corps, gathering Newtypes from Zeon-held territory and prototype Mobile Armors from the Flanagan Institute.

When Degwin attempted to negotiate peace with the General Revil of the Federation, Kycilia was en route to the location with her fleet in case the negotiations failed. Her fleet's sensors picked up the IR signature of the firing of the Solar Ray colony laser, but she was unaware of the death of her father until Gihren told her, also claiming that the firing of the weapon was an accident.

As the opening shots of the Battle of A Baoa Qu were fired, however, Gihren Zabi finally confessed to Kycilia that he killed their father, Degwin, stating that it was too late and mistimed for peace negotiation anyways. In a furious response, Kycilia executed Gihren with a single shot to the head and took control of all Zeon forces during the battle. She declared that not even her own brother could get away with the crime of patricide and promised that she would stand trial once the battle was over. However, this turn of events resulted in many Gihren loyalists withdrawing from the battlefield, as their confidence was in Gihren and not in the Zabi family as a whole. As the defenses began to falter, Kycilia gave the order for the Zeon forces to retreat, and for the defenders of A Baoa Qu to surrender fifteen minutes after her escape; she promised hostage exchanges afterwards. As she attempted to leave the space fortress on her flagship, Chimera, Char Aznable decapitated her by firing a rocket launcher through the bridge window. The Chimera was destroyed only moments later by Federation warships; the crew unable to inform the Zeon fleet of Char's treachery. Without Kycilia's leadership, the Zeon forces rapidly fell into disarray, with individual commanders recovering what suits and pilots they could, then fleeing; others fighting to the death, believing their commander to still be alive but unable to escape.

There is some debate as to the nature of her relationship with ace pilot Johnny Ridden, however, they appear to share a courtly love. He refers to himself as her knight, and uses the symbol of a unicorn as a dedication to her. Immediately before his sortie at A Baoa Qu, Ridden hands her a hand-carved amulet of a unicorn, an heirloom from his grandfather, which she accepts as a token and secures to her pistol. When she shoots Gihren, however, she is seen discarding the amulet - perhaps in the belief that she is no longer pure and worthy of the Unicorn.

M'Quve worked directly under Kycilia's command, and was evidently one of her most trusted officers. M'Quve was entrusted to most of her large scale operations, including running Zeon's complex mining operations throughout Eastern Europe and the deployment of the MAX-03 Adzam, which she personally joined him on. Despite his extravagent and conniving ways, M'Quve appeared to genuinly hold Kycilia in very high regards, going out of his way to please her where possible, including orders to bequeath his prized white porcelain Vase to her upon his death. It is unknown how Kycilia regarded M'Quve beyond entrusting him with military operations, although it was enough to look past his numerous personal clandestine operations on Earth.

As seen in Gundam Pilot Series of Biographies: The Brave Soldiers in the Sky 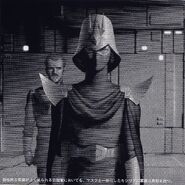 Kycilia often plays a more visible role in Gundam video games than she did in the series, as she is the ultimate commander some of Zeon's most elite units. These same elite units provide perfect fodder for arcade games: