Kudelia is a strong willed, courageous woman who is willing to risk her life to fight for her ideals and protect those precious to her. She has a great love for Mars and its people, causing her to start Mar's bid for independence from Earth. Her sheltered life gave her a somewhat naive perspective about the suffering of the Martian people. It was only after travelling with Tekkadan did she develop a greater worldly understanding of the problems Martians suffered. Throughout her time with Tekkadan, she develops close bonds with the group, especially Mikazuki and Atra. She is very loyal to those who earn her trust, never doubting them and standing by their side.

She is a pacifist by nature, always looking for the best solution with the least bloodshed. She aspires to be a symbol of hope for the people of Mars.

Kudelia is seen in many outfits throughout the series. Her main outfit is a long red Victorian style dress with a dark grey neck ribbon and brown high boots. When going out or attending meetings for formal occasions she wears a business suit which is a dark navy blazer, white shirt and red tie. She also wears dark navy shorts with high knee socks possibly due to being in Space so if she were to wear a skirt they wont float upwards.

Sometimes when busy in the base and helping others she wears a white shirt with a pair of army fatigues.

She has an excellent academic record, majoring in history and economics. Befitting her title as "The Maiden of Revolution", Kudelia has proven to be a very charismatic orator, capable of pacifying an entire Gjallarhorn fleet through her words alone, a feat that Mikazuki describes as "amazing".

Due to her comfortable upbringing, Kudelia had little to no skills in cooking or other house chores, relying on Fumitan to help her. She improves as she learns how to cook during her time with Tekkadan.

Kudelia Aina Bernstein is the daughter of Norman Bernstein who represents Mars' Chryse Autonomous Region. Her mother is Norman's second wife, Tomomi Bernstein. In her second year, she visited Noachis as a representative of Chryse College and made a speech calling for cooperation between the various regions seeking independence. After this Naochis July Assembly, the independence movements were stirred up and she gained many followers among them. Chryse Guard Security, a private security company, was hired to escort her to Earth. This job was continued after the company was reformed into Tekkadan.

Kudelia seems to have taken a liking to Mikazuki, frequently coming to him for advice. Mikazuki initially views Kudelia as very naive and patronizing towards the child soldiers at CGS and refuses to shake her hand at their first meeting. This changes when she offers to provide funds to solve the group's financial problem after the coup d'etat by the Third Group. He starts to warm up to her and explains to her things like the Human Debris and the situation of selling crops on Mars. After the funeral held following the battle with the Brewers and listening to Naze talk about women, Mikazuki kissed Kudelia, causing her to become very flustered while he did not think too much of it. His respect for her grows when she pacifies a hostile Gjallarhorn fleet mid-battle with words alone, something he admits to her not even Orga can do. During his battle against Ein in Edmonton, he becomes furious when Ein exclaims that he will kill Kudelia along with the rest of Tekkadan for all of their "sins". It is later shown that during his breaks from duty, he and Atra visit Kudelia at her office, and that he has her handle his paychecks. After Mikazuki and Atra made the decision to conceive a child, Mikazuki asked Kudelia to help Atra look after their child in the event that he were rendered unable to do so. Kudelia was initially heartbroken upon hearing the news, not fully realizing until a moment later that Atra wished for a polygamous romantic relationship between herself, Kudelia, and Mikazuki, an idea she concocted after seeing how comfortable and happy the women of the Hammerhead's crew were while sharing the affections of and for Naze Turbine. Kudelia laughed at the how strange their situation was, but fully accepted the love triangle between them, and agreed to their individual requests. After Mikazuki was killed in the final battle, Kudelia made good on her promise to Mikazuki, and took every opportunity her schedule could allow to visit Sakura's farm to be with Atra and her son, Akatsuki.

Atra initially viewed Kudelia as a rival for Mikazuki's affections, which played a role in her choosing to join Tekkadan. However the two soon become close close friends, and together, they help with making meals and washing clothes. After meeting the Turbines and learning about Naze's harem, Atra begins to accept Kudelia as a fellow potential "wife" of Mikazuki. Later, Atra willingly put herself in danger when she claimed to be Kudelia in order to keep her safe. She later tells Mikazuki and Kudelia that they are all family. Atra eventually gives Kudelia a bracelet of her own, matching the ones already worn by herself and Mikazuki. It is also shown that Atra and Mikazuki visit Kudelia at her office on Mars when Mikazuki is not on duty.

When Mikazuki appeared mentally unphased after losing his ability to walk after his battle with the Hashmal, Atra recalled a story Haba told her, where she "tied down" her reckless husband by becoming pregnant. Thinking that she could do the same for Mikazuki, Atra begs Kudelia to bear Mikazuki's child. Kudelia is caught off guard by the sudden request, and quickly declines, but questions Atra why she couldn't bear Mikazuki's child herself. Atra responds that she believes that Kudelia was more deserving of the opportunity than herself, but Kudelia manages to convince Atra that she should make the attempt. After Atra confesses her feelings to Mikazuki, they eventually decide to follow through and try to conceive a child. After doing so, Mikazuki asked Kudelia to help Atra look after their child in the event that he were rendered unable to do so. Despite understanding Atra's feelings, and personally encouraging her to pursue Mikazuki, Kudelia was still heartbroken upon hearing the news, thinking that she missed her opportunity to make her own feelings known. However, she did not fully realize until a moment later that Atra actually wished for a polygamous romantic relationship between herself, Kudelia, and Mikazuki. Kudelia laughed at the how strange their situation was, but fully accepted the love triangle between them, and agreed to their individual requests.

After Mikazuki was killed in the final battle, Kudelia made good on her promise to him, and took every opportunity her schedule could allow to visit Sakura's farm to be with Atra and her son, Akatsuki. At an official promotional event held in Shinjuku on April 9, 2017, it was revealed that Atra and Kudelia married.[1]

Kudelia knew Fumitan since her childhood, and saw her as an older sister figure. She trusted Fumitan enough to ask her about the meaning of a kiss from a man and whether she should marry that person, resulting in the usually cold woman giggling at Kudelia's innocence. Kudelia's close relationship with Fumitan caused the latter to go against the conspiracy to have Kudelia assassinated. Fumitan even gave her life to protect Kudelia. Fumitan's death caused Kudelia's personality to mature, as she now knew a little of what the boys in Tekkadan went through. In her memory, Kudelia named Admoss Company after Fumitan. 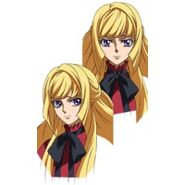 Appearing in the 1st opening along with Fumitan

Kudelia in the first episode.

Attempting to shake hands with Mikazuki. (Iron and Blood)

Kudelia in the PV for Season 2 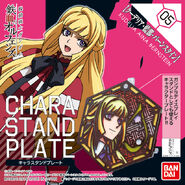