Unlike his fellow Stardust Knights, Kratz holds honor in a lower regard and would prefer to eliminate the opposition with no mercy. Kratz also shows no hesitation in double crossing his fellow Knights if it benefits him in the long run as shown when Valder assumes control over OZ Prize.

Over the course of the story, Kratz became more and more unhinged and obsessed with defeating MO-V's Gundam pilots due to the multiple defeats and decided to seek more power. Upon receiving the Gundam Burnlapius, Kratz's mental stability deteriorated to the point where he is only obsessed with defeating the Gundam Pilots. He was killed when the Burnlapius' PX System overloaded.

One of the Stardust Knights and OZ Prize's leaders, Kratz held honor in much lower regard than his compatriots. As the assault on MO-V dragged on, his patience with Roche's actions began to wear thin. When Valder Farkill appeared to take over Prize, Kratz wholeheartedly supported him to the point of backstabbing Roche. However, Kratz's skills were still inferior to Roche's, and after his repeated defeats at the hands of MO-V's G-Units, he decided that he needed a Gundam to defeat them. Eventually Dr. Berg built the Burnlapius for Kratz, and though his use of the PX System allowed him to defeat Roche and the L.O. Booster, an extended battle with Odel allowed the System to take its toll, destroying both his mind and his Gundam. 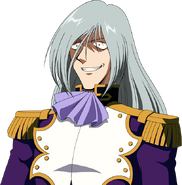