While only used in the manga, Kouki Gundam is shown to have two gatling guns with one mounted on each arm.

The equipment on Kouki Gundam's back.

A mysterious crystal that is mounted on Kouki Gundam's shield. In the manga, Kouki was chosen by the fragment after it had broken off from the armor of Shinsei Daishogun.

A cape that, when combined with the shield, serves as a seal on Kouki's power. When released, his agility is raised ten times or more.

Kouki Gundam's transformed mode. In this form, he has the ability to pierce the enemy at unimaginable speed, but with the elegance of a crane.

Kouki Gundam first appeared in the SD Musha Gundam manga Shichinin no Chōshogun as the leader of the Seven Chōshogun. He was born at Mount Ooe, which is the same mountain where it is said that Yondaime Daishogun suppressed an ogre attack. After defeating a group of enemies that were devastating a village, he became referred to as the "Onishōgun of Justice". He is hailed as the second coming of Yondaime Daishogun. He also dislikes shiitake mushrooms.

When Kouki first appears to protect Musha Victory, who had been attacked in a village below Mount Ooe. He and Victory then work together to defeat the New Dark Army forces that attacked them. The two of them are about to attack the force’s leader, Shokew, but are halted by his attempt to summon the Kyoudai Judou Musha. Shokew is stopped by Raimei Gundam, Tenchi Gundam, and Juuou Gundam, who had been guided there by the Crystal Phoenix. Despite this, Shokew is able to escape. Suddenly, the Crystal Phoenix appears and explains that the Mushas were gathered there because each of them had one of the shattered fragments of Shinsei Gundam Daishogun’s Gundam Crystal. Kouki and the others that were carrying the crystal fragments were then given the title of “Choshogun” and the task to find the remaining three holders.

During the search, he, Victory, and the other Choshoguns fight the soldiers of the New Dark Army that attack various villages. During one of these fights, Kouki saves Musha Victory, who had been fighting recklessly. The Choshoguns and Victory arrive at Yasogi Village, only to see that it was in ruins. The culprit is revealed to be Orochi Big Zam, who had been lying in wait to attack them. Kouki, believing that Victory was too spoiled to understand the severity of war, orders him to run away while they fight. Musha Victory refuses, and is captured when he tries to attack Orochi Big Zam. Forced to hold back because of this, the Choshoguns struggle to save him. Victory then realizes he has to save himself and does so by stabbing one of the monster’s eyes. Noticing this, Kouki orders the Choshoguns to perform an all-out attack and finishes off Orochi Big Zam together with Victory.

On the Dark Army Battle Ship

After the battle, the group decides to split up in order to quickly find the remaining Choshoguns, with Kouki being paired up with Victory. They come to a riverside, where there is a commotion. The villagers there explain that there is a monster that causes people to disappear if they cross the river, preventing them from going home. Hearing this, Kouki takes Victory with him to defeat a monster and they discover a Dark Army battleship within the fog. They are attacked by Val Walo, causing the boat they were using to sink. As a result of this, Kouki and Victory are captured. They awake inside a prison cell a few hours later and find out that they will be executed the next day. The next morning, Kouki and Victory are tied to a post on the ship’s deck for their execution. Just then, the two of them notice that their executioner had a beam crystal on him. The executioner, who introduces himself as Musha Tetra and was the fifth Choshogun, cuts their ropes and tells them to escape. During the fight against the soldiers on the ship, Victory is attacked by Val Walo and, to Kouki and Tetra’s shock, is thrown into the water. Tetra then asks Musha Victory to summon the Golden Plumage. Using this, Victory defeats Val Walo and helps Kouki and Tetra off the ship. Tetra uses bombs to blow up the ship, thus making the river safe to cross. When the three return to land, Tetra explains that he was sent by Shinsei Daishogun to help them.

Eventually, they reunite with the other Choshoguns at Mount Anaheim to discover that the remaining Choshoguns, Bakuryū Gundam and Senriki Gundam, have been recruited. The group first encounters and engages the Berga Brothers. During the battle, V-maru is swallowed up by the ground after Giros’ earth breaking attack, startling the Choshoguns. Giros is defeated, but V-maru is assumed dead, much to Kouki’s denial. However, there is no time to grieve due to the approaching Judou Musha Army. The group struggles against the army and seem to be out of luck until Victory suggests combining their power to summon the legendary giant. Kouki gives the order, and the Choshoguns combine the power of their beam crystals. The crystals cause the mountain to erupt and the legendary giant, Kidou Musha Daihagane, appears holding V-maru. V-maru enters Daihagane as its pilot and destroys the Judou Musha Army, leaving Shokew and Mazaku left. Mazaku transforms into Hadou Musha Mazaku and engages Daihagane while the Choshoguns and Victory engage Shokew.

Shokew in response activates a dark barrier in order to prevent them from moving. After Tetra sacrifices himself to break the barrier, Kouki comments that this will be Tetra’s funeral battle. At that moment, the Crystal Phoenix appears holding Tetra’s beam crystal. He tells Victory and the Choshoguns to believe in the light. The Phoenix activates the Beam Crystal, reviving Musha Tetra as Tetra Gundam. Kouki then gives the order to advance with Tetra. By combining their power, they are able to defeat Shokew. However, they realize that the Island of the Sky is dangerously close to Ark. Shokew says that he will stop the island if they give their lives. They refuse and Victory is then mortally wounded by Shokew in response. After obtaining power from his father to become Victory Choshogun, Musha Victory fights Rig Shokew. When Victory, V-maru, and Daihagane leave to stop the Island of the Sky from falling, Kouki and the remaining Choshoguns distract Mazaku to prevent him from interfering.

After the fall was successfully stopped, the group returned to Rettei Castle where they decide to focus on rebuilding Ark.

In the events of Chōkidō Daishogun, Kouki had gone with the other Choshoguns to address Victory Daishogun’s sudden change to violence, but had never returned since. It is later revealed that they had been possessed by Walter Gundam so that they would only be able to obey Master Gundam. They were later freed from the possession by Musha Godmaru’s group.

He also appears as a Gunpla piloted by Minato Sakai against Sekai Kamiki and his Musha Godmaru in episode 4, G-Muse.

Kouki Gundam as he appears in the Shichinin no Choshogun manga

Kouki Gundam uses one of his two Gatling guns 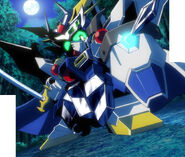 Kouki as he appears in Gundam Build Fighters Try

Retrieved from "https://gundam.fandom.com/wiki/Kouki_Gundam?oldid=498503"
Community content is available under CC-BY-SA unless otherwise noted.