Kotaro Ogami (オオガミ・コタロー, Ōgami Kotarō?), also known as Tigerwolf (タイガーウルフ, Taigāurufu?) (aka Tri-Fang, Mr. Tiger), is a character that appears in the Gundam Build Divers television series. He is the builder and pilot of the XXXG-01S2龍虎狼 Gundam Jiyan Altron.

Tigerwolf is a Diver in the Toraburyu (虎武龍) force, which is based in the Estania Area on the Asian Server. Because his personal battle style is strongly focused on close combat, this manly man strives hard in his training every day. Perhaps as a result, he has no immunity to women.[1]

Ryukorodo is Tigerwolf's ultimate secret attack. Shrouded in a golden aura, his Gunpla punches and unleashes energy in the form of a tiger and a wolf. These two energies then coil together to create a devastating beam.

Tigerwolf considers Magee to be a good friend. 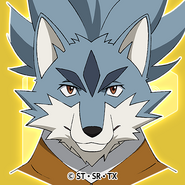 Tigerwolf lifts water up into the air

Tigerwolf stands under the falling water