Kojiro is gruff and informal, with a fatherly concern for the pilots and crew who depend on his skills. He always keeps an eye out for the young and inexperienced Kira Yamato.

Murdoch was one of the few Earth Alliance personnel that survived the initial ZAFT attack on Heliopolis. He and his remaining team of mechanics regrouped with Natarle Badgiruel aboard the Archangel.[1] After Murrue Ramius and Mu La Flaga made their way to the Archangel Murdoch supervised the repairs to the GAT-X105 Strike Gundam and the TS-MA2mod.00 Moebius Zero.[2]

When the Archangel was stationed at Artemis, Murdoch tried to prevent Kira from revealing himself as the Strike Gundam’s pilot to the Eurasian officers, knowing it would cause trouble for the young man. However, Kira ended up revealing himself when the officers began assaulting Miriallia. Murdoch helped overwhelm the Eurasian personal off of the Archangel along with the rest of the ship's crew during ZAFT's attack on the base.[3]

Following the Battle of JOSH-A, Murdoch deserted the Earth Alliance, along with the rest of the Archangel crew.[4] When the ship had returned to Orb, Murdoch decided to remain on board to assist the ship in its future battles.  When the Archangel had joined with the Kusanagi and the Eternal to become the Three Ships Alliance, Murdock went on to assist the Archangel’s mobile suit pilots, Mu La Flaga and Dearka Elsman. After the war ended, Murdoch lived as a civilian in Orb and worked as a mechanic for Morgenroete[5]

After the Assassination Attempt of Lacus Clyne, Murdoch was one of the original Archangel’s crew to return to the ship and left Orb when the nation joined forces with the Earth Alliance.[6] Murdoch continued his role as the Archangel’s chief mechanic and was happy when another of the Archangel’s former crew, Miriallia Haw, returned. After returning to Orb, Murdoch oversaw the repairs to the Archangel following its battle against the Minerva and assisted Kira in preparing the Strike Rouge for exiting the atmosphere when the Eternal was in danger.[7] 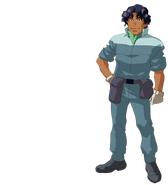