Koichi Nanase (ナナセ・コーイチ, Koichi Nanase?) (aka KO-1 in GBN) is a character from Gundam Build Divers. He is the builder and pilot of the Galbaldy Rebake.

Though he was once an excellent Gunpla builder good enough to appear in the World Tournament, a certain incident led to his retirement from Gunpla Battle.[1] Four years ago, the members of his team decided to quit, after the scene shifted from GPD to GBN.[2] The efforts of Riku and his friends touch Koichi's heart, and he decided to make his comeback as a member of their force.[1]

Before Koichi retired from competition, it was said that he could have been number one in the world.[2] His achievements then are as follows:

Koichi is the older brother of Nanami. 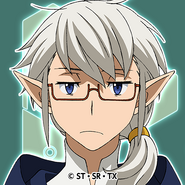 Group Photo (Ep 25)
Add a photo to this gallery

Retrieved from "https://gundam.fandom.com/wiki/Koichi_Nanase?oldid=450973"
Community content is available under CC-BY-SA unless otherwise noted.