Knight Unicorn Gundam's sword. This sword has an Akashic Binder, an item that allows him to perform the card summoning magic "Call". It gets destroyed at the end of Unicorn Knight VS Destiny Knight.

Knight Unicorn Gundam's shield. Like the Magnum Sword, it also has an Akashic Binder.

The name of Knight Unicorn Gundam's unmasked form in SD Gundam Ultimate Battle. He has two versions of this form: One while he was possessed by Red Majin Shamblo and one that is his true form.

Knight Unicorn's unmasked form in New Testament SD Gundam Gaiden: Saddrac Knight Saga. This is the form he takes when his limiter is released, so it is much more powerful than his Beast Mode.

Equipment said to have the power of the gods. Unicorn attempts to use this against Devil Dragon Knight Destiny, but goes berserk. After awakening the armor, he gains the Laplace Javelin as his main weapon.

The Knight Unicorn Gundam, along with its brother Black Knight Banshee, was created by Superior Dragon[1] from two beast spirits from the Garden of Wisdom's tapestry. The two knights are created after the worlds of Saddrac and Llion Cardzi were fused, however it caused various problems all across the land. These knights were given the power to transcend through time to address the world's problems.

Knight Unicorn Gundam first appeared in the Kingdom of Lacroa to assist Knight Gundam in the battle against a strange group of Gundams from other dimensions. During the fight, Knight Gundam began to feel that it was wrong for fellow Gundams to fight with each other. After injuring himself while shielding Crown Knight the Third from an attack, Knight Unicorn offered him the Three Divine Instruments of Flame to gain the Pheonix Armor. Using the Phoenix Armor, Knight Gundam defeated Shikkoku Musha Gundam Sinanju, but was turned into a card as a result. Knight Unicorn reveals that his entire goal was to become god of the Saddrac world, and begins to take control of the remaining warriors. As the battle continues on, Tenkai Bujin Matsuri Musha Mikoshimaru appears and said that he was following Knight Unicorn from the higher dimension. He was too late as Knight Unicorn had obtained greater powers and turned himself into Full Armor Knight Unicorn Gundam. However, Knight V2 Gundam knew he was possessed by Red Majin Shamblo, but says he is an enemy and must be defeated. He is then convinced by Ryūkenshi to use the power of the Thunder Sword and the Storm Sword to destroy it. As the armor is destroyed and Knight Unicorn was freed, the warriors all attacked the Shamblo with no chance of winning. As Knight Unicorn regains himself, he shows off his true powers and Mikoshimaru lent him a card to seal him. With no choices left, he used the Saint Sword Excaliber R and the powers of all 16 Worlds to defeat and seal Red Majin Shamblo.

As the curse is broken and peace is restored in Lacroa, he then left the kingdom and transcended into time once more into the future, arriving at the Kingdom of Britis. He encountered Crown Knight the Third, who had become Crown Blue Knight Gundam after the events of Ultimate Battle, and was chosen to be one of the Knights of Round Table.

After confirming the growth of Crown Knight Red to Crown Knight Aegis, he opened a time tunnel to quickly return to Britis Castle. However, he was ambushed by Black Knight Banshee, who stole the Magnum Sword from him. Knight Unicorn chased after him until he reached Britis Castle. After discovering that Banshee had taken over the castle, Unicorn begins to fight him.[2] During the battle, Black Knight Banshee yells at Unicorn, telling him not to get in the way of him acquiring his greatest desire. Despite understanding these words, Knight Unicorn Gundam strengthens his resolve to defeat him. In response to this determination, New World Guardian Knight God Gundam, as a representative for the young guardian god Sunborn, lends him the Ex-Raker. Using the Ex-Raker, Knight Unicorn Gundam manages to knock the Magnum Sword out of Banshee's hand. Black Knight Banshee vanishes, saying that he will get his desire.[3]

Knight Unicorn appears seemingly out of nowhere in the Netherworld to assist Crown Knight Freedom and Crown Knight Justice. He summons Holy Machine Soldier Gunrex and confronts Black Knight Banshee. During their battle, Banshee reveals that he was after the Holy Grail so he could get out of his role of keeping the world stable.[4]

Birth of the New King

When Britis Castle was attacked, Knight Unicorn Gundam appeared at the center of The O Dante's revival. Sensing the revival of the dark emperor Sieg Zeon, he summons the legendary heroes of Lacroa. In order to defeat the fully revived Sieg Zeon, he lended his power as a Knight of the Round Table to King Gundam V.[5]

Knight Unicorn, with Crown Knight Strike Gundam, is sent to various time periods in order to seal the Elemental Dragons that awakened from Banshee's attack on the Garden of Wisdom. However, after the events of Birth of the New King, the seals on the Elemental Dragons are broken by Banshee, forcing Unicorn to summon the past Knights as well as Britis Duke Strike.

After the events of the previous arc, Unicorn travels to the kingdom of Zaft alongside Vassal Duke Strike Freedom, where they are attacked by Evil Dragon Knight Destiny. In order to defeat him, Unicorn equips the forbidden Phantom Beast Equipment. He manages to force Destiny into retreating, but becomes unable to handle the power it radiates and goes berserk. His rampage is stopped by Knight Impulse Gundam, who uses the Storm Sword to destroy both the armor and his Magnum Sword. Afterwards, Unicorn, feeling that he was a burden, leaves Vassal Duke Strike Freedom's group in order to train.

While on his training journey, Unicorn is guided telepathically by a fairy's voice and reaches the dungeon Megalanica. He arrives in Industrial Seven Village and meets with the villagers. They explain that Fairy Princess Mineva (the fairy that guided Unicorn) was captured a few days ago and Unicorn offers to help rescue her. He and a small team of Knights advance through the dungeon and later encounter Banshee. Even though Knight Unicorn is suspicious about his motives, Banshee joins the group anyway.[6] During the journey, the group encounters the Geara Zulu brothers, who transform into a monster. The monster is defeated by Banshee, but the Shamblodon, the monster that had been guarding the powerful Laplace box, awakens. The Shamblodon forces Unicorn to equip the Phantom Beast Armor and Banshee to become Banshee Norn. The armor causes him to go berserk and fight with Banshee. However, the desire to protect his allies cause him to break free of the armor's influence and awaken his power. Unicorn uses his new power to defeat the Shamblodon and save Banshee and Mineva. After the battle is over, he has a brief vision of Superior Dragon ZX congratulating him for awakening the armor. Upon returning to the village, Unicorn is thanked for his help and leaves.

Final Clash of the Thunder Sword

With his training journey being over, he meets up with Vassal Duke Strike Freedom to confront the Zaft Clan at their mobile base, the Minerva. During this battle, he fights Legend Gundam directly using the Phantom Beast Equipment. 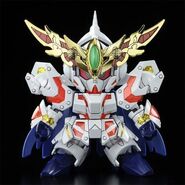 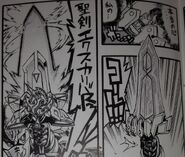 Knight Unicorn's card from Birth of the New King

Retrieved from "https://gundam.fandom.com/wiki/Knight_Unicorn_Gundam?oldid=437010"
Community content is available under CC-BY-SA unless otherwise noted.