Knight Gundam (also known as Kishi Gundam) is one of the titular mobile suits of the SD Gundam Franchise, which started with SD Gundam Gaiden and later in Gundam Musou 3. Unlike the Musha Gundam, the Knight Gundam is based on a Medieval Knight. The Non-SD version is designed by Hajime Katoki and is voiced by Yasunori Matsumoto and Lucas Gilbertson.

Unlike the RX-78-2 Gundam, the Knight Gundam differs from the original due to its Medieval European Motif and its armor, the only part still resembling the original Gundam being the head. Another thing about the Knight Gundam is its size, which is a bit taller than an average mobile suit but is shorter than any mobile armor produced. The unit is usually a close combat unit armed with a sword and shield but sometimes uses its Lance for greater attack power as well as summoning magic. The Knight Gundam is also capable of going to its full armor mode to increase its overall performance and mobility.

Unlike the Musha Gundam, the Knight Gundam is not capable of using long-ranged weapons, further indicating about it's chivalrous code of close combat rather than long range artillery.

NOTE: These armaments appeared in the video games Gundam Musou 3 and Mobile Suit Gundam Extreme Vs. 2 only.

The Knight Gundam's default weapon. It uses it to cut down enemies in one swing. Unlike beam sabers, it doesn't need high amount of energy to use it. In Full Armor Mode, it becomes a fire sword, capable of destructive power.

A long lance used for taking down powerful enemies. It is also used to cast some magic spells as well, such as electrical fields or energy pillars.

A standard shield used by the Knight Gundam. It has two forms which can be accessed through it's Full Armor mode.

The Knight Gundam can also use a special bow to shoot energy arrows onto the enemy. This however is enabled only in Full Armor Mode. In addition, it can create a magic spell which superimposes a gigantic emblem in front of the bow's line of fire, once the arrow has crossed it, it will split into various projectiles capable of hitting a great number of enemies.

NOTE: These features appeared in the video games Gundam Musou 3 and Mobile Suit Gundam Extreme Vs. 2 only.

The Knight Gundam is capable of using magic and summoning Rune Circles and elemental spells to inflict damage to the enemy.

Another feature of the said mobile suit is its Full Armor Mode, once activated, the Knight Gundam will use the sacred armor of the Gundam Clan and an upgraded sword to increase it combat capabilities.

Knight Gundam first appeared in SD Gundam Gaiden Sieg Zion Hen. A mysterious knight with the same name as the legendary hero who comes to help Princess Frau to suppress Satan Gundam. He is actually a fragment of Superior Dragon.

The original plot had Musha Gundam Mk-III from the Musha Gundam world running from some pursuers after he had stolen the Platinum Shield when he was struck by lightning and transported to the Saddrac World, where his good half became Knight Gundam (and bad half Satan Gundam). That setting clashed with the explanation of Superior Dragon and was thought to be ignored but it was later fixed by saying that Satan Gundam fused with a dragon on arrival at Lacroa.[1]

He's also one of the three heroes summoned to fight against the force of Space Overlord in Musha Knight Command SD Gundam Scramble short.

In one scenario of Gundam Breaker 3, an SD Knight Gundam Gunpla is given its original personality by Gunpla Battle AI system. 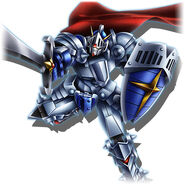 in Mobile Suit Gundam Extreme Vs. 2 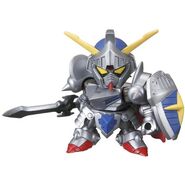 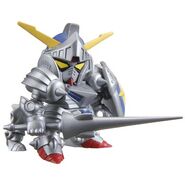 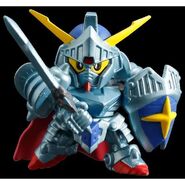 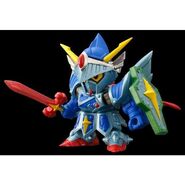 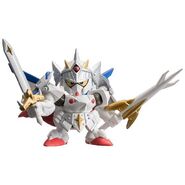 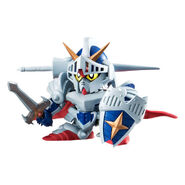 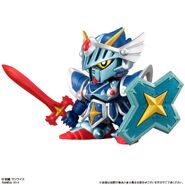 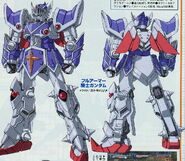 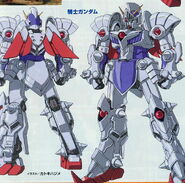