Klimton Nicchini (クリムトン・ニッキーニ, Kurimuton Nikkīni?) better known as Klim Nick (クリム・ニック, Kurimu Nikku?) is a main character from the Gundam Reconguista in G anime series. He is originally a Lieutenant on the Megafauna, he later becomes a captain on the Salamandra.

Klim Nick is a confident individual often calling himself a genius. He does this so frequently that other members of the Megafauna crew mockingly refer to him as "lieutenant Genius." He prides himself on his piloting skill, good looks and tactical skills. He also respects the skills of other talented pilots such as Mick Jack and Bellri Zenam but refuses to let them outshine him.

The son of Ameria's President, Klim Nick is an extremely talented mobile suit pilot with strong ambition. Piloting the Montero, he heads out in an effort to rescue Aida after the death of Cahill Saint. 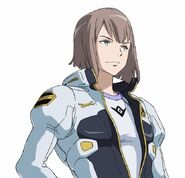 Retrieved from "https://gundam.fandom.com/wiki/Klimton_Nicchini?oldid=443346"
Community content is available under CC-BY-SA unless otherwise noted.