Klaus Grad (クラウス・グラード, Kurausu Gurādo?) is a fictional character in Mobile Suit Gundam 00. Klaus is the commander and the de facto leader of Katharon Rebel Group, which opposes the Earth Sphere Federation and its elite squad A-Laws. After the defeat of A-Laws and the Innovators, Klaus becomes a representative within the ESF.

Klaus has a generally calmed personality and he is not carried away by his emotions when taking important decisions. From the beginning he expressed a great faith towards Celestial Being.

Not much is known about Klaus' past. It's unknown when and/or why did Klaus began to resent the ESF, it can only be speculated that the Federation were doing things he didn't approve and eventually left the ranks.

Klaus is a top member of the third branch of an anti-government organization known as Katharon, which opposes the Earth Sphere Federation and its elite squad A-Laws. After an almost failed rescue mission on the Proud succeed with the help of Celestial Being and its Gundam units, Klaus seems grateful and claims that this might be a chance to get the help of someone who shares their goals and helps them back in return when they need help.

Celestial Being was planning an attack on the Federation prisoner, containing many suspected anti-government prisoners, including one of their surviving Gundam Meisters, Allelujah Haptism. One of Katharon's agents, Lyle Dylandy, who was recruited into the paramilitary organization, found it an excellent opportunity to help start a mass jail break and relayed the plan to Klaus. While the Gundams kept the Federation MS forces occupied, Katharon guerrillas infiltrated the prison and freed many of its occupants. Once both groups had completed their respective extractions, they pulled out. Klaus then told Shirin that one of the prisoners was Marina Ismail, her former sovereign, who was in the prison for suspected relations with Celestial Being and had been rescued by Celestial Being.

The Gundam Meisters and tactical forecaster Sumeragi Lee Noriega later meet with Klaus at Rub' al Khali, leaving Marina and Saji Crossroad in Katharon's care. He offers Katharon's allegiance and asks for an alliance; it is turned down, as Setsuna informs them that they are opposing the A-Laws, not the Federation. However, Klaus remains confident that they will join hands in the near future.

A little while later, A-Laws somehow located their base at Rub' al Khali. Instead of engaging the enemy directly, Klaus orders his men to strengthen their defenses and wait for Celestial Being to save them, but is also caught up in the mayhem caused by the invasion of Automatons to their main base. After its destruction, Klaus leads the survived members to another branch of Katharon near the Suille Kingdom, where they learn that the Federation had set up an administration system and had in effect and as of now, Azadistan and many other Eastern nations no longer exist.

Because the only standing nation in the Middle East, the Suille Kingdom, had the military strength and intelligence to oppose the Federation, a delegation was sent to the Suille ruling family to negotiate information on the Federation's actions in the region. But suddenly, the entire capital city was destroyed from orbit by the A-Laws new weapon, Memento Mori. Fearing its power, the Katharon coordinators decided to dedicate their entire space fleet to destroying the satellite arms. However, the weapon was too well guarded and the majority of the fleet was slaughtered. However, with Celestial Being's assistance, Memento Mori was destroyed. Debris from its destruction came raining into the atmosphere like falling stars. A child orphan said it was pretty but Klaus corrects her: "It is the flames of war."

In the aftermath of Memento Mori's destruction, the Federation Parliament had announced that they will be giving direct control of the regular army to the A-Laws, prompting a number of officers to plan a coup d'état. The dissident faction contacted Katharon to negotiate. Klaus decided to go, despite Shirin's warnings that it might be a trap, so she went with him. En route to the rendezvous point, their transport encounter Arche Gundam and 00 Raiser. The former puts up its sword against aircraft to force the latter to surrender but 00 Raiser was able to use its special ability to save the Katharon members. Then suddenly, everyone can hear Marina's song, due to the effects of the Twin Drive on Trans Am.

Klaus and Shirin then arrive in a town to meet with their contact. Their contact informed them about the coup d'état but didn't disclose when or where it will happen, fearing information will be leaked. The dissidents only want Katharon to observe their actions before deciding to support them. Klaus promises to inform all their cells about this, as well as Celestial Being, surprising their contact. Klaus reveals that Celestial Being, has the power to combat the A-Laws. As their contact leaves, Klaus was very convinced; Shirin acknowledges this, as they have few options left.

The Coup d'état faction took control of the AEU's orbital elevator, the one place that the A-LAWS cannot touch. Led by Colonel Pang Hercury, his subordinates took control of the solar distribution system, the linear trains and kept civilians hostage, attempting to force the Federation government into confessing about the A-LAWS' atrocities. While the Federation mobilized their ground forces at the base of the elevator, the A-LAWS launched Automatons onto the elevator to eradicate all witnesses. They even doctored images from security footage on board the elevator to make it seem like that coup d'état troops were massacring the civilians, not the automatons. Klaus was enraged, for peace can never be attained through such despicable actions.

Eventually, the A-LAWS planned on using a new Memento Mori to destroy the elevator. 00 Raiser managed to severely damage it, but failed in stopping it. The blast took out a chunk of the elevator, causing the systems to auto purge its shell, dislodging and killed all the civilian witnesses in the linear trains descending to Earth, as well as threatening the cities to the west of the tower. Celestial Being urged the Federation, the coup d'état forces and Katharon to unite together to protect the cities.

In the aftermath of the Break Pillar incident, the Federation pinned the elevator's collapse on anti-government forces, garnering enough public support to grant the A-LAWS complete control of its army. One by one, Katharon cells were being hunted down and eliminated. Klaus was in hiding in a cottage in Europe, with Shirin, Marina and the children from Rub' al Khali. Unfortunately, the Security Bureau tracked them down. Klaus held them off while the others escaped.

Klaus somehow managed to survive the ordeal and managed to rendezvous with Shirin at another one of their safehouses. He then showed her Marina's song, which was somehow spread across, the world, symbolizing the people's desire for true peace. They then picked up Marina and the children so that they could head to space.

Working the remnants of the coup d'état faction, led by former A-LAWS commander Kati Mannequin, Katharon assisted Celestial Being when they faced the largest A-LAWS fleet in history, which was intent on eradicating Celestial Being with overwhelming force. Klaus led his troops in two of their three remaining cruisers, and helped Celestial Being out of the tight spot of an area filled with particle disruption mist. With their physical weapons an advantage in the field, Katharon was able to push the A-LAWS back, before, with their allies, assaulting the fleet as two sides. Then suddenly, a massive particle beam shoots from the dark side of the Moon, annihilating the majority of the A-LAWS fleet and one Katharon cruiser. The source of the beam was then revealed to be the massive colony ship, Celestial Being.

Celestial Being announced to their allies that they will attempt to retake the supercomputer Veda from the Innovades, the true masters behind the A-LAWS, in order to atone for their sins. Unfortunately, they faced head opposition with the kamikaze Gagas, capable of Trans-Am. Katharon and the coup d'état faction assist in suppressing fire.

With the recovery of Veda, the A-LAWS' true colors were exposed to the Earth Sphere. The Federation disbanded the corrupt group and underwent reforms, as well as restore the sovereignty of the nations that were forcibly subdued. With Katharon disbanded and its members pardoned, Klaus and Shirin became part of the government, to help with the reforms.

Shirin Bakhtiar
She acts under Klaus' leadership. She shows great concern towards Klaus; and the same is true about him. It's been shown that both of them have a deep mutual respect for each other and they share a bond through their experience together. In the novelization, it is pointed out that Shirin was pregnant with Klaus's child at the end of the series. 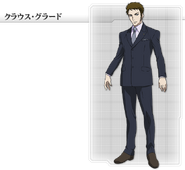