Born Kikka Kitamoto, she was one of three orphans brought on board the White Base during the One Year War, along with Letz and Katz. While aboard, the three orphans became a combination of mascots and troublemakers for the ship, and were involved in several incidents, including Ramba Ral's last ditch attack on the ship, as well as Char's infiltration of Jaburo, when they helped to dispose of the bombs. The latter incident lead to their being allowed to stay on the ship, even when she left Earth to return to space for the final offensives at Solomon and A Baoa Qu. After the battle ended, the three kids showed their Newtype abilities, when they reached out to allow Amuro to find the lifeboat on which the White Base crew had escaped the ship.

Following the One Year War, Kikka was adopted by Hayato Kobayashi and his wife Fraw Bow, along with Katz and Letz. The three visited Amuro Ray's home in Cheyenne, Wyoming before continuing on to Japan. She stays close to her adopted mother, helping her with the unborn child Fraw is carrying. 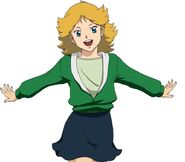