Colonel Kenneth Sleg, formerly assigned to weapons research and development, reorganizes the Kimberly task force into the "Circe Unit." He has the peculiar habit of wielding a riding crop. He becomes acquainted with Hathaway Noa and Gigi Andalusia during a hijacking attempt on the shuttle Haunzen at the beginning of the story. He forms a friendship with Hathaway in the wake of this incident. However, in his battles against Mufti, Kenneth is anguished when he realizes that the organization's leader is Hathaway himself and succeeds in stopping the Ξ Gundam's attack in Adelaide. He attempted to conceal Hathaway's identity as Mufti from his father, Bright Noa, who was in command of Mufti's subsequent execution.

Unfortunately, Kenneth's efforts were wasted after the betrayal of his senior officers. The Federation government opts to publicly reveal Hathaway as Mufti, and used the media to glorify Bright's execution order of his own son. Angered by this decision and subsequent glorification of Hathaway's execution, he voluntarily retired from the army. He rendezvoused with Gigi in Kyushu, Japan, where Hathaway was born, with him remarking that "he could set up a similar organization one day". 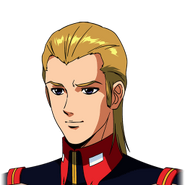 Retrieved from "https://gundam.fandom.com/wiki/Kenneth_Sleg?oldid=459962"
Community content is available under CC-BY-SA unless otherwise noted.