Ken Bederstadt (ケン・ビーダーシュタット, Ken Bederstadt?) is a lead character in the Mobile Suit Gundam: Lost War Chronicles video game. In the game, the player assumes his role in the Zeon Story. He also appears in the Gundam Legacy manga. He first appeared as an unnamed protagonist for Zeon side of the game before his background and name are established in manga version.

A Zeon pilot, Ken is the Captain leading the Zeon MS squad featured in the game and in the manga. He is known to have worked for the Colony Public Corporation and was involved with the construction of the Side 3 space colonies. He enters the One Year War as a officer in the Foreign Legion who rose to the rank of Lieutenant, leaving behind his only daughter in space, though it is unknown what happened to his wife.

Ken has become an ace in the ever diminishing ranks of the 5th Terrestrial Mobile Division, which is called the Foreign Legion, which is made up of soldiers who aren't official Zeon citizens but volunteered for military service. Because of this Ken and other legionnaires are often mocked by regular Zeon military personnel. However the Legion has become an elite and sturdy force in the Zeon war effort.

Ken who is involved in testing and protecting Zeon military resources when combat operations begin against several Federation Special Forces teams, is shown to be a highly talented soldier and pilot. He earned the nicknamed "Pitiless War God" after he is driven into a killing frenzy due to the death of Corporal Yuki Nakasato during retreat from a Federation attack. He survived the war and served in the Zeon Republic Army after the war.

He was appointed as the Republic of Zeon's chief of defense forces, and was promoted to the rank of Captain. After discovering a plot involving renegade Principality of Zeon remnants, he descends to Earth with former Midnight Fenrir Corp members Nikki Roberto and Charlotte Hepner to stop them. 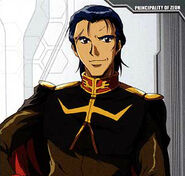 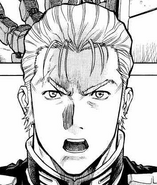 Ken Bederstadt as he appears in Gundam Legacy