Kazov is a fictional character from the After War Gundam X anime.

Captain Kazov is a New United Nations Earth officer that leads the 36th Regiment, and is charged with recapturing the Eight Base after it has been taken over by Space Revolutionary Army spies. While trying to accomplish his mission, his Bandaal land fortress comes under attack by both mobile suits from the SRA and the crew of the Freeden as they try to get Garrod Ran and the Gundam Double X into space. While trying to combat all of the mobile suits and the land battleship, he focus on trying to destroy a new Bartok space battleship that the SRA spies are stealing. His error in ignoring the other targets on the field leads to his death as the Freeden rams into the Bandaal, causing the command center to explode. 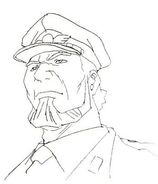 Retrieved from "https://gundam.fandom.com/wiki/Kazov?oldid=349524"
Community content is available under CC-BY-SA unless otherwise noted.