Kazahana Aja (風花・アジャー, alternatively spelt Kazahana Azure) is a fictional character from the Mobile Suit Gundam SEED Astray series. She is a 6-year old girl and a member of Serpent Tail and the daughter of Loretta Aja. It is unknown if she is a Coordinator or Natural.

Kazahana was born in C.E. 65. Her mother, Loretta, left the Earth Alliance for unknown reasons. Both mother and daughter would soon join Serpent Tail together, with Kazahana's intelligence proving to be helpful in the mercenary group's missions.

In the Mobile Suit Gundam SEED Astray manga, Kazahana is first seen on Orb, talking with Morgenroete head Erica Simmons over some deals concerning Serpent Tail. When the Junk Guild landed on Orb, she was there to greet them, taking the group by surprise at her young age, though Lowe Guele vouched for her. When Juri Wu Nien's flirting with Lowe begins to upset Kisato Yamabuki, it was Kazahana who was able to cheer her back up and tried to get her to stop worrying. As well, she was present in aiding the repairing of the Archangel. Kazahana would later meet with the Junk Guild during the construction of the Giga Float.

A few months later, Kazahana would be present during the incidents involving Prayer Reverie and Canard Pars. During this time, Kazahana would grow close to the sickly Prayer, even possibly harboring a crush on him. When Prayer and Canard had their final duel, Kazahana would chase after them, only to land too late: Canard was safe, rescued by Prayer. Prayer, however, succumbed to his cloning flaws and died. When she returned to Serpent Tail's base to make her final report, she finally broke down in tears over his death.

At an unknown point during the latter months of the First Alliance-PLANT War, Kazahana participated in a mission to capture a ZAFT ZGMF-1017M GINN High Maneuver Type. After the mission ended in success, Serpent Tail was blocked by Edward Harrelson in his GAT-X133 Sword Calamity, where she expressed concern for Gai's safety as he engaged Edward in a duel.

She become a protagonist of Mobile Suit Gundam SEED ASTRAY Princess of the Sky alongside Lath Winslet, and given the MBF-P01-Re3 Gundam Astray Gold Frame Amatsu Hana. 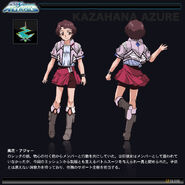