Katokk Alzamille is a fictional character from the After War Gundam X anime.

A long serving member of the United Nations Earth military, he stayed on and continued his service with the New United Nations Earth military. Working his way up from the enlisted ranks during the 7th Space War, he served as one of the ground troops. His actions on and off the battlefield have made him unpopular with officers, his offenses including shooting one of his own commanding officers.

Picked by the New UNE officers to head up Zonder Epta and the mission to capture the Freeden, Katokk wastes no time in letting Colonel Aimzat Kartral, Shagia and Olba Frost know that he has a low opinion of Newtypes. Since he considers himself to be a soldier he will complete his task in capturing the Freeden, and puts together a team to do just that. Disguising himself and his team as fishermen on a damaged boat, he gains access to the Freeden, but is escorted along with his group to a holding cell and captured. Finding out that Tiffa Adill sensed that it was a trap starts Katokk questioning the abilities of Newtypes, he sits and waits with the rest of his group till the other stage of their plan comes into action and the Freeden is attacked by the Frost brothers and a group of mobile suits.

With the crew distracted, Katokk and his team force their way out of their cell and engaged in a running gunfight with Jamil Neate and other members of the Freeden as they try to escape. Katokk gets his team out of the ship, but remains behind with a grenade, intent on blowing himself up and causing damage to the ship, allowing for the soldiers under his command to have more time to escape. His plan is foiled when Tiffa runs up to him and wraps her arms around him in a hug, begging him not to kill himself, the look in her eyes of deep sadness causes him to drop the grenade and duck for cover to shield Tiffa from the blast as Jamil tosses it outside the ship.

Locked up in one of the Freeden's quarters, he is questioned by Jamil about the base he came from and their conversation shifts to that of the war and why he hates Newtypes after he called Jamil "Hero". Jamil tries to explain to him why he is doing what he is doing, but Katokk continues to remain set in his views of Newtypes as they continue on their way to Zonder Epta. When he is finally left alone in his room, Katokk takes out a piece of candy from his pocket, wadding it up to disclose that it is actually and explosive and blasting the lock off of the door. Disarming the guards he takes their weapon and heads to the bridge, capturing Jamil and the bridge crew as they come within sight of the island. As he stands there with Jamil he tells him his true reason for hating Newtypes and Jamil, that his wife and daughter were on the colony that Jamil personally destroyed during the 7th Space War and that they died because of it. As Jamil surrenders the ship, Tiffa gives Katokk a drawing that she made of a woman and a young girl smiling and playing happily together, the image shocking the man because it is identical to a faded and ruined picture of his wife and daughter he carried with him.

As the crew of the Freeden make their escape, Katokk has a change of heart thanks to the picture given to him by Tiffa and helps Garrod in his struggle to reach the New U.N.E. ship that is transporting Tiffa and Jamil to the Newtype Research labs. As they fight their way through the ship, they discover the Gundam Double X in the cargo hold and try to hold position there to capture it. Pinned down in the dark cargo hold by snipers, Katokk comes up with a plan to get Garrod into the cockpit of the Gundam Double X and blast the door open, the light coming in from outside blinding the snipers and allowing him to pick them off as the boy runs to the Gundam. The perfect plan fails as Garrod discovers that the Gundam needs a control unit just like the Gundam X in order to operate, and he sits with the Garrod as they hold off the New U.N.E. soldiers outside the hold. When they start to run low on ammunition they are rescued by Jamil and Tiffa who have escaped with the Gundam X control unit, but before Tiffa can give it to Garrod, Katokk sees more soldiers open fire on the children.

Using himself as a human shield, Katokk protects Garrod and Tiffa till Jamil can take out the soldiers with his own machine gun. Mortally wounded he lays dying in Garrod's arms, telling Jamil the truth, that his family was killed by the United Nations Earth by a poison gas attack, but he found it easier to blame Jamil and Newtypes instead of the government in which he served. Before he dies in the arms of the young boy, he tells him not to make the same mistakes that the past generation did. 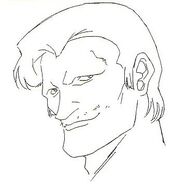 Carbon drawing done by Tiffa Adill, depicting Katokk's wife and daughter from an old photo in his wallet.
Retrieved from "https://gundam.fandom.com/wiki/Katokk_Alzamille?oldid=349521"
Community content is available under CC-BY-SA unless otherwise noted.