Karlmann is a baby orphaned by Woowig's attack. He was found by Uso Ewin and Katejina Loos and Shahkti Kareen is the one who takes care of him. He remains a frequent character throughout the series and is often seen alongside (and often on the back of) Shahkti Kareen, Haro and Flanders. He later shows his Newtype powers to indicate the location of Fuala Griffon bells. 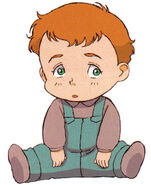 Karlmann and his Mother Lineart
Community content is available under CC-BY-SA unless otherwise noted.
Advertisement