Hero of the demon beard

Hero of the demon beard

Calm and composed, bold and fearless, a man baring both propriety and valor. Also active as a strategy advisor. Even Sousou (Cao Cao) look to having him as a subordinate.

Under that Oni mask, a tragic past is concealed.

Known as "Chousei (長生)" in the past. He lost to Ryofu (Lu Bu) in the fight to protect his village and as a result his village is burned down and the villagers are killed. His lover Rouran was killed too. After that he puts on the Oni mask and live to seek revenge from Ryofu (Lu Bu). That was until he met Ryuubi (Liu Bei), who made him rethink his actions. Later he became sworn brothers with Ryuubi (Liu Bei) and Chouhi (Zhang Fei).

After the fall of Toutaku (Dong Zhuo), Sousou (Cao Cao) and his forces attempt to convince Kan-u to leave his oath brothers and join with them.

In Gekitotsu hen he was with the Sousou (Cao Cao) Troops for a while but due to Kakuka's (Guo Jia) suspicion that he was a spy, Kan-u was on roll for execution. Later he break out of jail with Shuusou (Zhou Cang), the Kan-u team is formed together with Kan-pei (Guan Ping) and Shuusou (Zhou Cang). They head for Ryuubi (Liu Bei) with the Sekitoba entrusted to him be Chouryou.

After the Red Cliff battle, he went with the others to Ekishuu (益州) to form the country of Shou.

In Senjin Kettou hen, Team Kan-u went to Gou in search of the Blade of Heaven. There, he was ambushed by the darkness overwhelmed Ryomou (Lu Meng), though heavily injured he willed all his strength to continue fighting the dark forces. He was given the fatal blow by Shuu Gundam (Chi You) but survived to see how Kan-pei (Guan Ping) has matured. He died with a contented look on his face.

Kan-U uses the Orge Dragon Fang Saber as his weapon.

The actor of the Kan-U Gundam is MSZ-010 ΖΖ Gundam. 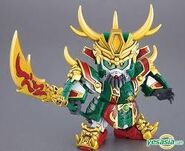 Add a photo to this gallery
Retrieved from "https://gundam.fandom.com/wiki/Kan-U_Gundam?oldid=378879"
Community content is available under CC-BY-SA unless otherwise noted.