Kamuna Tachibana (カムナ・タチバナ, Kamuna Tachibana?) is a fictional character and protagonist of the Mobile Suit Gundam Climax U.C.: The Bonds of the Bloodline manga series.

Born into a prestigious military family, he graduated from military academy with honors. Kamuna is the eldest son of Earth Federation Forces lieutenant general Nishiba Tachibana with a promising military career, however, he hated following the tracks of his father and became a pilot on the frontline. He was assigned as platoon leader after graduation with Pamil Macdamil, Shirley Ramsey, and Ellen Rocifer under his command. He participated in the Battle of Odessa as a newly appointed second lieutenant in November, U.C. 0079. Although he received a one-star promotion for his role in the defense of Jaburo, Kamuna began to worry about the difference between the ideals and reality.

During the Delaz Conflict, he encounters Zach Windsor, a Zeon pilot he faced during the One Year War. His father, Nishiba, was killed during Anavel Gato's attack on the Naval Review at Konpeitoh. He volunteered for the Titans shortly after the Delaz Conflict, where he was nicknamed the "Young Nobleman of Iron" for his active participation in the suppression of Zeon remnants after the One Year War. During the Gryps Conflict, Kamuna started having doubts about the nature of Titans after his childhood friend and fiancée, Nagisa Florin, dies due to the colony laser attack on Side 2 and listening Char Aznable's speech at Dakar. Following a fallout with Pamil, he deserts from the Titans and surrenders to the AEUG.

Although he was detained after the Gryps Conflict and tried to leave the army, he was reassigned to the Federation Forces public relations information bureau along with Ellen as a reporter. During this time, Kamuna learns that his former subordinate Pamil joined Char's uprising. He returns to the front as a pilot at the urging of Shirley, now a member of Londo Bell, to fight in the Second Neo Zeon War. Kamuna, Shirley, and Pamil are reunited on the battlefield, where they participate in pushing back Axis from falling to Earth.

After the battle, Kamuna was promoted to brigadier general and became fleet commander of the Frontier Side forces. During this period, he married Ellen and had twins, Nana and Syun. Ellen is later killed in a terrorist incident by the Oldsmobile army, making Kamuna the object of Syun's hatred. Syun would eventually join the Crossbone Vanguard. During the Cosmo Babylonia war, he was dismissed over a fiasco involving a heart attack that lead to the withdrawal of the fleet. Although Weibull Gardner is appointed as second fleet commander, he invited Kamuna to participate as a staff officer in the Illuyankas Fortress capture operation, formulating long-range sniper tactics. During the battle between Nana and Syun, Kamuna boarded the RGM-122 Javelin Prototype despite his old age to rescue them and managed to reconcile with Syun following desperate persuasion. He regained family bonds during the final moments of his life and passed away shortly afterwards. 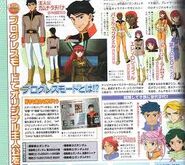 Retrieved from "https://gundam.fandom.com/wiki/Kamuna_Tachibana?oldid=428736"
Community content is available under CC-BY-SA unless otherwise noted.