Kamille Bidan (カミーユ・ビダン, Kamīyu Bidan?) is the main protagonist of the Mobile Suit Zeta Gundam television series and a supporting character in Mobile Suit Gundam ZZ. He is the pilot of the MSZ-006 Zeta Gundam.

Kamille particularly hated his very feminine-sounding name - and thus violently asserts his manhood by developing a hobby in amateur mobile suit creation. This he might have inherited from his parents: both are Federation officers and among the main engineering team that designed the Titan's prototype unit, Gundam Mk-II. He also showed a willingness to fight by stealing a Gundam to step on a Titans officer who had previously interrogated and abused him. He also tends to be brash, thoughtless, somewhat self-important, and prone to acting on his own judgment, in addition to being arrogant in his own right. This leads to him getting more than his fair share of abuse, both mental and physical, at the beginning of the series, like being beaten badly by Wong Lee, and being slapped quite a few times for his bad attitude. However, he eventually comes under Char Aznable's influence as the series progresses. This mentor-protege relationship plays a great role in shaping Kamille from an emotionally vulnerable, angst-ridden teenager to a true soldier, though he remains highly fragile emotionally, which only continues to worsen as those he cares about die around him.

According to Yoshiyuki Tomino, Kamille has the strongest Newtype powers in the Universal Century series. Most of his Newtype powers did not manifest itself until the late portions of Mobile Suit Zeta Gundam, however he is augmented by contact with Cyber-Newtypes such as Four Murasame and Rosamia Badam, even Elpeo Ple. The strongest points of his power are revealed when he uses Zeta Gundam's Waverider Mode to crash Paptimus Scirocco at the end of the series. He is filled with strength from the souls of slain Newtypes who are close to his heart. Although the mental death throe by Scirocco destroyed his mind, he begins to recover in ZZ Gundam and became even more powerful than before. He is able to contact and speak with characters such as Ple telepathically and even sense what they do while still functionally comatose. At the end of ZZ Gundam, he lent his powers to Judau Ashta, allowing the latter to defeat Haman Karn.

Kamille was born on Earth on November 11, U.C. 0069 in the suburbs of Tokyo, Japan [1]. He grew up in the Gryps (formerly called Green Noah) space colony - which was then the field base of the Earth Federation's Titans elite unit, an organization to which his father, Franklin Bidan, belonged. Growing up, Kamille was frequently bullied for his feminine name, and quickly caught onto the marital problems between his parents, which forced him to retreat into hobbies such as martial arts and mobile suit development. His closest friend was his neighbor, Fa Yuiry, who had a habit of trying to better Kamille much to his annoyance.

After a scuffle with Titans officer Jerid Messa over insulting his name, Kamille is detained by them at their base in the Gryps space colony. During an Anti-Earth Union Group raid to steal the new prototype Gundam Mk-II mobile suits, he escapes and helps the AEUG steal all the Gundam Mk II units. Under the tutelage of AEUG officer Quattro Bajeena and former Titans officer Emma Sheen, Kamille later becomes one of AEUG's top pilots while maintaining his civilian status - first in his stolen Gundam Mk II and later in his personally designed MSZ-006 Zeta Gundam.

During the Gryps conflict; Kamille witnesses the deaths of his parents, lover, and friends caught in the Titans nefarious machinations. Though a generally nice person, he tends to act on his emotions and personal judgment rather than balanced rationalization, this has placed him in deep rivalries with ambitious and calculating men like Jerid Messa and Paptimus Scirocco.

Kamille's life is changed again when he meets a strange young female Titan pilot. Her name was unknown, she was simply referred to as "Four Murasame" because she was the fourth Newtype to come from the Murasame Newtype Labs. The two fall powerfully in love at first sight yet were torn apart time and again. Being a Cyber-Newtype, she was mentally unstable and attacked Kamille anytime her Psycho Gundam is near (the Psycho Gundam's computer systems utilize negative emotional stimulus to drive its pilot into battle). Like the Lalah Sune archetype before her, Four's death cements Kamille's side of the rivalry with Jerid: while finally escaping Titans clutches, she died in battle with Jerid to save Kamille's life. Ironically, despite this potential cause of antipathy, Kamille later shows no real signs of a genuine hatred of Jerid: he treats him much like any other Titan pilot. It's likely that this develops because Kamille thinks that hating Jerid is, at this point, useless.

As the battle of the AEUG and the Titans approach its fateful conclusion in the First Gryps war of UC 0088, Kamille begins tapping the mysterious "Bio-Sensor" in the Zeta Gundam as his Newtype abilities grew, thus unleashing a power never before seen. This was displayed when Kamille used the power to destroy Yazan Gable's Hambrabi. Kamille's anger (at Yazan's enjoyment of killing people) triggered the Bio-Sensor which in turn enshrouds the Zeta in a purple glow of power. Kamille used this power to extend the length of the Zeta Gundam's beam saber then sliced Yazan's Hambrabi in two although Yazan was able to eject in the escape pod. In his final battle with Scirocco, Kamille proved to have the stronger mind (having gained the strength of all the people he loved who had died during the war). Despite impaling the Zeta Gundam into Scirocco's PMX-003 The O, a dying Paptimus Scirocco still managed to unleash a mind-crippling blow to Kamille Bidan, leaving him in a delusional psychotic state.

At the start of the series, Kamille is brought to the Shangri-La colony inside 1 for medical treatment. His condition has worsened since the end of the battle, leaving him a vegetative state, unresponsive to anyone or anything around him. When the Argama is taken over by their old enemy Yazan Gable and a group of Shangri-La junk dealers, he is taken hostage. However one of the junk dealers, Judau Ashta, is a latent Newtype and his presence causes the comatose Kamille to consciously move for the first time since the start of the First Neo Zeon War. Kamille motions Judau to take his hand and the two experience a Newtype reaction, possibly implying that Kamille sensed Judau's powers and awakened them. After the incident is resolved Kamille is transferred off the Argama to a hospital in the colony and remains there with Fa Yuiry, who eventually retires from the AEUG, to watch over him.

Sometime after the Argama leaves Shangri-La, Fa and Kamille travel to Earth, the two settling in Dublin, Ireland, where Kamille is interned at a hospital with Fa as his nurse. When the war brings the Argama to Ireland they reunite with Kamille and Fa and learn that, while he is still vocally unresponsive, Kamille has clearly recovered much of his mental faculties. He plays a key role in saving Elpeo Ple and the Argama from a Neo-Zeon attack, communicating to her as well as the rest of the Gundam team through telepathy and guiding them to victory. Later as the bulk of Neo Zeon heads towards Dublin, Kamille begins to have convulsions as he senses the rebirth of the Psycho Gundam Mk-II and that its pilot, Ple Two, is close to awakening. When it's discovered Haman Karn is dropping a colony on Dublin, the Gundam team decides to smuggle Kamille out of the city, knowing that he would try and fight to save the people. Kamille resigns from the fight only when Judau reassures him that he will do all that he can to save the people; sensing that Judau has inherited his will, Kamille vocally responds for the first time since the series beginning, though it is only a soft "yeah" it signals Kamille's full recovery, as he has been put at ease with the knowledge that the AEUG is in good hands. Despite this when the situation turns bad for the AEUG and Karaba, Kamille desperately rushes to aide them, but his efforts are in vain as the colony hits before he can do anything, killing millions.

Fa once again finds him and comforts him, and the two then watch as their friends fly into space, still determined to defeat Haman. At the end of the First Neo Zeon War it appears that Kamille has completely recovered his mental faculties as he is seen running along a beach with Fa in the series finale. This may indicate he had finally found a chance for a peaceful life alongside his old friend, partner, and now girlfriend, Fa Yuiry.

Gundam metaverse creator Yoshiyuki Tomino noted on the official website of Mobile Suit Zeta Gundam: A New Translation that he intended to retcon Kamille's tragic fate at the end of the Gryps War to something more optimistic, in order to balance out the series' bleak tone. The 3-part film adaptation and recollection of the original TV series met rather wide success in Japan, with the new ending resulting in Kamille managing to resist Scirocco's crippling mind attack and reuniting with Fa at the conflict's conclusion. This outcome has long been thought about as an alternate ending to Kamille's story, although it is uncertain if this is a retcon or to be treated as an alternate universe to the main Universal Century history as Kamille's new fate contradicts events in Mobile Suit Gundam ZZ.

In the novel version of Zeta Gundam, Kamille much like Amuro died tragically. In a change of events, Rosamia does not die in the Psycho Gundam Mk-II but instead was piloting a Baund Doc. He was found in his vegetative state in the Zeta Gundam when Gates Kappa found him. Seeking revenge for the death of Scirocco and his comrades. Gates prepared to fire at the Gundam when Rosamia attempted to persuade Gates to let Kamille go, Gates does not relent and tries to kill Kamille but killed Rosamia and was also killed as well. This causes Kamille to go into complete madness as he thought Rosamia was his mother. When Fa came to pick up the Zeta Gundam, she found the hatch open and thought Kamille was sleeping. However, it was heavily implied that Kamille had committed suicide shortly after Rosamia's death. 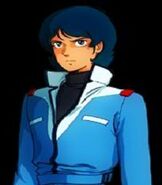 Kamille and the Gundam Mk-II 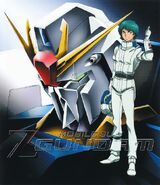