The Full Burst Psycho Gundam is the modified form of Four Murasame's captured MRX-009 Psycho Gundam. It features a tricolor scheme similar to the RX-78-2 Gundam. Adjustments were made to the Psycommu System in addition to a rear-mounted container which houses bits called "Haro Funnels". Its right shoulder mounts a powerful Burstliner cannon.

The Mobile Fortress mode is now made to resemble the G-Fighter, with beam guns attached to the shield and the Burstliner cannon mounted underneath it.

Classified as a build MS, the Full Burst Psycho Gundam is actually a modified Gunpla of the Psycho Gundam. The backstory given by its builder is that the Psycho Gundam was captured by Karaba during the battle in New Hong Kong. Hayato Kobayashi orders it to be modified for Amuro Ray, in the image of the G-Fighter and the RX-78-2 Gundam. 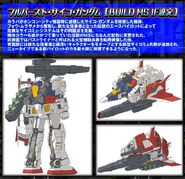 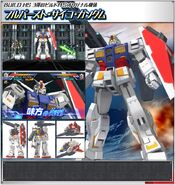 Retrieved from "https://gundam.fandom.com/wiki/KRX-001_Full_Burst_Psycho_Gundam?oldid=465182"
Community content is available under CC-BY-SA unless otherwise noted.