An original Gunpla built by Sekai with guidance from Shia Kijima after the 13th U-19 National Tournament, the Kamiki Burning Gundam has a high level of completion. Sekai used the TBG-011B Try Burning Gundam as a reference when creating it. Other than Sekai, no other fighter can bring out this Gunpla's full power. Like the Build Burning and Try Burning, the Kamiki Burning also emits Plavsky particles directly for propulsion and the transparent blue parts on its body seem to be for storing Plavsky Particles for later emission.

Designed for melee combat, the Kamiki Burning can use a long sword stored on the rear waist during close range battle in addition to Sekai's "Jigen Haoh School" martial arts techniques and his newly created style of martial arts known as the "Kamiki Gunpla School". Unlike the Build Burning and Try Burning, Kamiki Burning can emit fire effects from its back even without assimilation, and these effects can be launched as fireballs or large fire fist at enemy units. Kamiki Burning also has another ranged attack in the form of a beam blast fired from the left shoulder's 'Kami' (神) sign. When the "Houou Haoh-Ken" technique is used after assimilation, there is an additional energy halo effect at the back beside the fire effects.

To prepare for the 14th U-19 National Tournament, Team Try Fighters came up with a New Winning Road attack where the SD-237S Star Winning Gundam's Star Funnels' Plavsky Power Gate is used to transform allied Gunpla into energy that is then absorbed by Kamiki Burning Gundam, powering it up.

Stored in a scabbard mounted on the rear waist armor, the long sword emits a temporary fiery effect when unsheathed. It serves to increase the suit's close combat attacking option, and has a longer reach than the suit's fists. It can also be used to defend against enemy's attacks, and is capable of slicing apart missiles, bullets, artillery shells and even beams.

A powerful beam fired from the 'Kami' (神) sign on the Kamiki Burning's left shoulder.

Generated from the backpack, the Kamiki Burning can shoot a total of six fireballs at far away enemies.

The Kamiki Gunpla-ryū (カミキガンプラ流, Kamiki Gunpla School?) is a form of martial arts created by Sekai Kamiki for use in Gunpla Battle. It is based on the Jigen Haoh School Martial Arts.

The ultimate secret technique ōgi (奥義, hiragana おうぎ?) of Kamiki Gunpla School and the suit's killer move, it is executed after assimilation. When using this attack, the Gunpla will release all of its stored particles, and fire created through the manipulation of Plavsky Particles as well as halo effects are produced from the suit's backpack. Flames are also emitted from the transparent parts on the arms, and they coalesce into a phoenix that flies towards the target as the Kamiki Burning Gundam punches.

The Kamiki Burning extends both its hands to the sides and generate a pair of large flaming wings from its back. The wings then transform into large hands, and Kamiki Burning launches them as gigantic fire fists.

A combination attack created by Team Try Fighters for the 14th U-19 National Tournament. The Plavsky Power Gate formed by the Star Winning Gundam's Star Funnels is used to transform the Star Winning Gundam and Lightning Gundam Strider into an energy form that is then absorbed by Kamiki Burning Gundam, increasing its attack power till the point where it could destroy a falling space colony with a single punch. When required, the Plavsky Power Gate can also transform additional allied Gunplas into energy form, and when the Kamiki Burning absorbs their energy forms and gains more power, it could summon the extremely large and powerful Superior Kaiser, which is the ultimate form of Superior Dragon. After absorbing the energy form of allied Gunpla, the Plavsky Particles within Kamiki Burning's transparent parts take on different color representative of the allies. 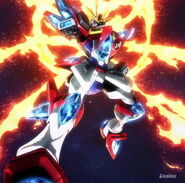 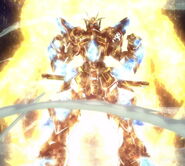 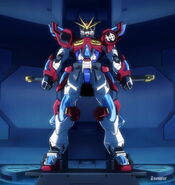 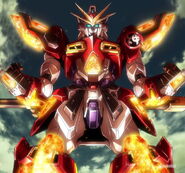 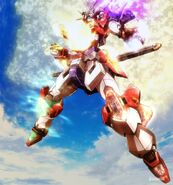