The Jupiter Empire (, Mokusei Teikoku?) is a self-proclaimed empire based in the Jupiter sometime after U.C. 0120. The Jovian colonies remain remote and mysterious throughout the Universal Century saga and often take sides in terrestrial affairs, generally in support of totalitarian regimes. Besides the supply of energy through the continuous shipment of Helium-3 by the Jupiter Energy Fleet, the empire supplied advanced weaponry to the Titans and the Earth Federation, aided Axis in the decade following the One Year War and provided assistance to the Crossbone Vanguard forty years later. However, their motives and objectives are never fully explained outside of Yoshiyuki Tomino’s six-volume manga side story Mobile Suit Crossbone Gundam.

The Jupiter Empire/Jupiter Sphere of nations, well known for their anti-Federation spacenoid sentiments, was founded by Crux Dogatie, one of the first colonists at Jupiter, who was its leader for a period of roughly 70 years, started somewhere in the mid U.C. 0060s. During the events of Mobile Suit Gundam F91, Jupiter willingly surrendered to the original Crossbone Vanguard and supported them during the Cosmo Babylonia War, with the current Jupiter Energy Fleet captain promising cooperation. This was supposedly done to put some pressure on the Earth Federation with the possibility of an energy embargo, which may have been one of the Empire's early passive-aggressive moves against the Earth Sphere. It is revealed in the story Mobile Suit Crossbone Gundam that Crux Dogatie greatly resented the Federation for at first ignoring Jupiter requests to become an independent nation and then for forcing him into a political marriage with Tetenith Dogatie's (aka. Bernadette Briett) mother, whom he claims to have married in his 80s, so they could keep an eye on him. During Dogatie's rule, Jupiter forces secretly built up power and over time created an impressive force of mobile suits and mobile armors.

The Empire's machinations were eventually discovered by Cecily Fairchild, who took her old name Berah Ronah to recreate the Crossbone Vanguard and gather supporters. The new Crossbone Vanguard operated as space pirates and soon began to attack the Jupiter Empire. In U.C. 0133, the Empire made its move to conquer Earth and sent the massive starship Jupitris 9 to the Earth Sphere, disguised as a peace delegation. Their plan caused the Earth Federation Forces to attack the Crossbone Vanguard, leading to their near destruction. Following this, the Jupiter Empire gave up its cover and openly attacked the Earth Federation, which was quickly overwhelmed by this surprise attack. The battle however changed in favor of the Federation, when the remaining Crossbone Vanguard and the colonial forces, which had remained neutral up until then, attacked the Empire. Eventually, the Empire's forces were defeated and Dogatie himself was killed.

After this conflict, the Crossbone Vanguard stayed active and secretly worked under the name "Blackrow Shipping" to crush the remains of the Jupiter Empire, as narrated in the manga Mobile Suit Crossbone Gundam: Steel 7. Several years after the war, the remaining factions of the Empire, under the command of their new Supreme Leader and Dogatie's brother-in-law Callisto's Shadow, became belligerent once again, implementing one of Dogatie's last projects, a Colony Laser named Divine Punishment which could attack Earth from afar. A second brief war ensued and Divine Punishment was eventually destroyed. At the same time, an Anti-Empire Jovian resistance force, possibly a part of Jupiter society that Grey Stroke (an aged Judau Ashta under an alias) resided with, pulled off a short coup and obtained power within the Jupiter Sphere.

Tetenith eventually returned to Jupiter and inherited what was left of her father's remaining fortune. Under her leadership, the Jupiter Empire was reformed into the democratic Jupiter Republic. While Jupiter avoided economic collapse thanks to her, the small nation still fell into a deep recession due to the strain of two failed wars. In order to improve the living conditions in Jupiter, she began three plans for the future: Argo Odyssey, an exoplanet exploration project. Development of the Manzana Flor, a ship equipped with a Minovsky Drive. And finally, the construction of Angel Halo, a massive immigration ship, in cooperation with Fonse Kagatie from Side 2.

The Jupiter Empire is a highly regimented and authoritarian society. Every citizen of the Empire has numbers tattooed on the back of their hand and they show these number to one another as a sign of greeting, however they keep knowledge of both the tattoos and their customs secret from people who are from the Earth Sphere, wearing gloves at all times around non-Jovians. It is unknown but speculated that these number may indicate more than the fact that a person is a Jovian, such as possibly revealing a person's rank and position in the Empire. Only two Jovians are seen without these tattoos, Crux Dogatie and his daughter Bernadette Briett.

The Jupiter Empire is also highly materialistic. This stems from how the Jupiter Sphere is naturally barren of the resources needed to support human life, such as plants and animals, water, or even breathable air. Each of these resources are manufactured in factories. Because of limits on manufacturing abilities, these resources are heavily rationed. A person is allowed only their given share and to take more is a criminal offense. Extra rations won't even be given to the sick, who naturally need more water than a healthy person, because resources such as water and air are considered more valuable than a person's life. An interesting bit of hypocrisy is how Crux Dogatie suspends his nine robotic puppets and one real body in large tanks of water, often with decorative fish swimming about. It is unknown if the water is necessary for some purpose but it is known that it could be better used in the hospitals where many people are suffering due to a lack of water.

Their materialistic society has led the Jupiter Empire to adopt a philosophy of survival of the fittest. The Jupiter Sphere is a harsh environment and is not easy to survive in. All Jovian of the Jupiter colonies must do their part in order to ensure the continued survival of their people, even if it means a twelve-year old boy working in an oxygen resource factory. The Empire demands quality work from its citizens knowing that anything less than the best could lead to death. As a part of this philosophy, anyone who is considered weak is looked down upon. This is possibly why hospitals don't go to the extra effort to help their patients. The fact that they got sick or injured in the first place is a sign of weakness, and those who die deserved death. This philosophy has caused many Jovians to look at Earthnoids and most Spacenoids of the Earth Sphere as weak, due to how they live in a resource rich environment and don't have to struggle to survive.

Metals and the mobile suits constructed from them are also considered highly valuable, though they are much more common and easier to get in the Jupiter Sphere. One of the possible reasons why they are so highly valued is that the metals and electronics in a mobile suit which is used for military purposes could have been used in the construction of a new resource factory. In the Jupiter Empire military, failure is not an option. Failure to defeat the enemy is an indication of weakness, and the loss of their mobile suit is a crime punishable with death. Jovian pilots have openly admitted that if they lose they will die. Crossbone Vanguard pilots Tobia Arronax and Kincade Nau witnessed Jovian citizens who were captured and, after their release, executed by a firing squad for their failure.

Not all Jovians share this rather heartless outlook on life, and a small underground movement exists among the civilians to change the government.

The Jupiter Empire has also a strong interest in Newtypes. They hold the common belief that Newtypes are the next step in human evolution, but they do not hold the belief of peace and coexistence of Zeon Zum Deikun philosophy. They believe that Newtypes, as the next stage in evolution, will beat out and consume the weaker Oldtypes until only Newtypes remain. To this end, the Empire studied Newtypes intensively and built several mobile suit squads piloted by self-proclaimed Newtypes, though most of those pilots and machines were defeated by the Crossbone Vanguard pilot and real Newtype Tobia Arronax. 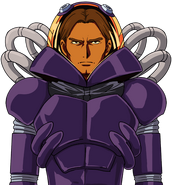 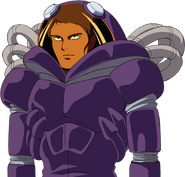