The Jukon-class submarine is the mainline submarine of the Principality of Zeon.

Based on the Juneau-class, the Jukon-class removed some of its predecessor's USM silos and replaced them with hangar space for mobile suits. It was able to carry 3 aquatic mobile suits and one Sealance for reconnaissance and communication. Some late production models were able to carry more than 4 mobile suits.

These vessels were originally designed and constructed by the Earth Federation Forces as the Juneau-class, before being captured by the Zeon forces that invaded Earth in U.C. 0079. The Jukon class submarines were modified by Zeon forces to carry specially developed amphibious mobile suits. It, along with the Mad Angler-class, are the only significant underwater combat vessels ever to have been depicted as being used by Zeon. This class of submarine was also considered by Zeon to be a key military asset in numerous Gundam video games.

Jukon-class (Side and Rear views) 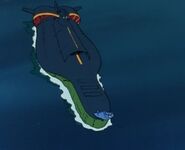